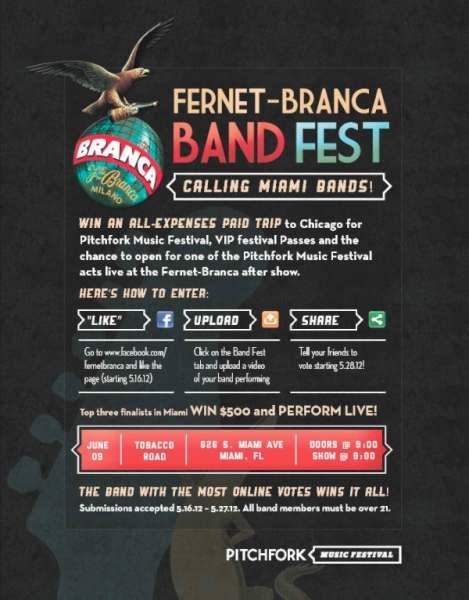 The contest kicks off regionally, calling all bands in Atlanta, Austin, Chicago and Florida to upload videos of their best original performance at www.facebook.com/fernetbranca to enter. Starting May 28th, fans can view and “Like” their favorite performance videos. The three bands with the most Facebook votes within each geographic region will win a semi-finalist prize of $500 and advance to compete in a local Fernet-Branca Battle of the Bands.

“Founded in 1845, Fernet-Branca’s identity is rooted in originality and we are committed to integrating exciting opportunities for artists, musicians and fans,” said Tom Maruscsak, Senior Vice President of Marketing for Infinium Spirits, the exclusive U.S. importer for the Italian brand. “This program offers the opportunity for independent bands to receive recognition based on the power of their fan communities, while providing them that once-in-a-lifetime chance to get noticed during a major music event.”

Fernet-Branca chose an after show at Pitchfork Music Festival for the winning performance because of the growing popularity of the festival and the caliber of bands who attend. Maruscsak added, “The festival draws great bands and music fans from around the country, so it’s the place to be for an up-and-coming group. We’re excited about the quality of talent we expect to see from the contest submissions and encourage the public to participate either by submitting their band performance to our U.S. Facebook page or by voting for their favorites.”