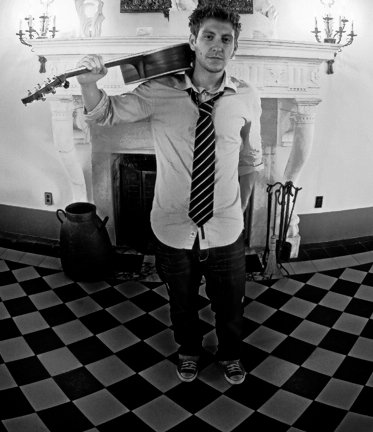 Channeling a voice that is smooth, melodic, and fully capable of vacillating from anguish to joy, singer/songwriter, Phil Jacobson, is a product of Chicago, Illinois, who has made his name in the Miami music scene following his tenure at the University of Miami, where he studied Jazz at the institution’s Frost School of Music. Jacobson used the experience he attained at the University as the impetus for his growth as a performer, using it a means to fully grasp divergent perspectives in music. It became the basis for his broad musical palette, and became the repository for his drive to experiment with different genres. Then, in 2010, Jacobson teamed up with friends Taylor Byrd on guitar, Alex Hoyt on keys, Brian Tate on bass and Brian Lange behind the drums, to form the Phil Jacobson Band. While his formalized training may have encompassed traditional Jazz, Jacobson’s compositions show a proclivity for immaculately polished Pop ballads that are indebted to the Blues and Rock. When listening to his music, one cannot help but notice the joy for life Jacobson brings into his poignant verses that seek to uplift and inspire, rather than sulk in melodrama. This is music that is tailored to invoke happiness, and it does this without succumbing to some ostentatious show of disingenuousness. There is a sense of earnestness that can be detected in the songs off of the band’s debut EP, Around it Goes that vividly showcases the fact this is a group that is doing precisely what it wants artistically, without ever once compromising for the sake of marketability.

Listening to the band’s debut EP, Around It Goes, we can’t help but notice that there’s a great deal of noticeable influences from some of the more blues-oriented rock bands of the mid-90’s in there. Growing up through music over the years, who have you looked up to artistically as being a major force in developing your sound?

Phil Jacobson: When I was younger, one of the first groups I was exposed to was The Beatles. I remember very clearly the way that their music would always make me feel really good. I couldn’t explain it then, there was just this thing about it. Their music expressed feelings to me without being able to understand the words. As I started to venture out and purchase my own music(in the 90’s) I became really into bands like The Wallflowers, Train and oh yeah there was this guy by the name of Michael Jackson! I’m sure I’m not the only one who has done this…but I had a cassette tape (remember those?!) of the song “Will You Be There” by Michael Jackson and I listened to that tape so many times on my Walkman that eventually the tape broke! Anyway, once I picked up and started playing the guitar I got more into listening to different guitarists and singer/songwriters. Eric Clapton grabbed me from the get go, I loved the way he played the guitar. He made playing seem so easy, both on the acoustic and the electric. Being from Chicago I definitely have this thing for the blues and Clapton definitely got me on that bus. Jason Mraz really appealed to the acoustic and vocalist side of me. I discovered his stuff right around the time I was learning to play and sing at the same time. I found I was really drawn to the flow of his lyrics and melodies. He gives you a lot of thought in his words while also being very playful with the melodies. So yeah, that’s only a few examples of the musical DNA that makes me!

Your songs seem to be a very candid and sentimental portrait into your thoughts on life. What exactly do you want your audience to take from your music, and what would you just rather avoid altogether?

Phil Jacobson: I would like people to be able to relate the songs I write to their own lives. Everyone’s story is different but at the same time we all experience and deal with similar emotions. I want to heal broken souls and have my music take people away from their problems, even if it’s only for a little while. Music makes the world go ‘round. If you let it, it will get you through the difficult times and make the good even better. As far as avoiding things, I want to avoid being musically stuck in a certain style. I want to experiment and play with new sounds and I hope my fans remain open to that.

There were probably some drastic pitfalls to be overcome in transitioning to the music scene here in South Florida, having performed Chicago prior to coming here. What do you think has been the biggest challenge you’ve faced in adapting to it, and what do you think needs to happen to really get the ball rolling as far as establishing a sense of community here?

Phil Jacobson: I didn’t do a lot of my original music in Chicago actually. That didn’t really start until I came down to the University of Miami to go to school. In Miami, the music I play isn’t widely listened to. The scene here is mostly Latin and Dance with some room for other styles. Regardless, those are made up of great artists with a lot to share. In creating a community the important thing is to continue strongly supporting each other. Supporting ALL styles of music. Miami needs to build some bridges when it comes to coexisting as a music community. What I think would be cool is if Miami got a House Of Blues! It could bring more nationally touring groups down here as well as open up opportunities for local artists to play. Just an idea…

So it is my understanding that you intend on returning to Chicago this summer to perform and hone your craft. Do you plan on returning to South Florida at some point in the future, and if so, what do you hope to bring back with you experience-wise?

Phil Jacobson: I would love to return to South Florida! Miami will always have a special place in my heart. I’ve grown so much in the years I’ve spent down here and would hope the experiences I have in Chicago only make me a better artist. I’m constantly evolving and always trying to improve different aspects of my craft. I hope to come back here with new songs and stories to share.

Now that you’ve recorded your EP, do you have any plans in the immediate future to record any new material, perhaps a full-length LP?

Phil Jacobson: I am actually in the process of recording a new material right now! I’ve linked up with my friends Dan Warner (producer, guitarist) and Mike Waxman to put this project together. It looks like it’s going to be an EP, but you never know! I’m really excited about it and I think people will really enjoy the songs on the album. Looking to release it later this year.

Phil Jacobson: it’s a reflection of our culture and community and that’s something worth supporting.

Phil is a fantastic songwriter. As an early adopter of his music, he’s grown so much and really developed his musical and lyrical craft. I can’t wait to see his following EP!

I like the Artist Spotlight. It’s cool that you guys are covering local acts in Miami. Great way to support. I’ve seen Phil Jacobson a few times and I really like his music. Great voice! Looking forward to the new EP. Will he be having a release in Miami at all?