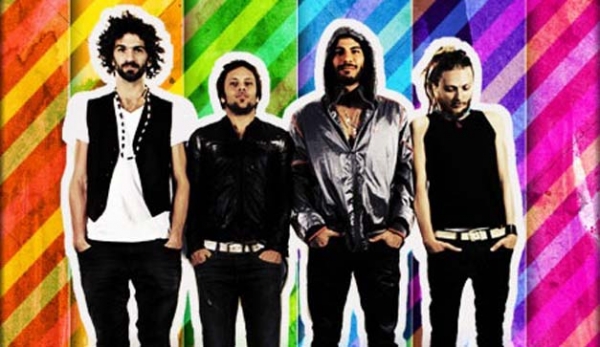 Having taken their name from the spirit of a 1970’s actor, summoned in a séance with the hereafter, Mexican outfit Timothy Brownie seek to continue their patron spirit’s work by creating music that infuses elements of disco, funk and traditional rock music. Having been brought together by an apparition from the spectral plane, with unfinished business here in the land of living, each Timothy Brownie performance can be seen as a ritualistic rhythmic gathering, fueled by the mystical brownies baked in the kitchen that once belonged to their eponymous patron spirit. Fascination with the otherworldly aside, the Mexico City-based quartet, which consists of Mariano Lanus on bass; Gonzalo Sandoval on percussion and keys; El Guero Cruz on guitar, theremin, and didgeridoo; and Uriel Del Toro on drums; has performed relentlessly, opening for the likes of Royksopp, Friendly Fires and Hot Chip. The band has melded a sound that harkens to Latin contemporaries, Los Amigos Invisibles, while distinguishing them as singularly unique with their throbbing, distorted guitar licks, playing against a deftly-manned rhythm section, and groovy keyboard flourishes. While devoid of vocals, the tracks seem to display a sort of minimalistic sheen befitting the organic aesthetic the band seeks to convey in their work. Their debut EP, entitled Legado Mutante shows a band that is not afraid to experiment with multitudinous arrays of sounds, genres, and disparate forms of instrumentation. They are in full command of their sonic arsenal, and seem poised to produce compositions that are much more experimental and ambitious in scope. Timothy Brownie will be bringing their organic sounds from the nether-realm to Miami, for an intimate performance at Bardot tomorrow night.

This is your second time in Miami in less than a year. What is it about performing here that keeps drawing you back time and time again?

Uriel: We felt that Miami would be a good starting point to enter the U.S. with our music. We feel very comfortable in a such a cosmopolitan city. Our music is universal, like Miami. We are beach lovers, and there are nice beaches, but we feel that Miami is changing for greater good. Many people think Miami is just beach, shopping and parties, but we found a new circuit of creative people and places that are in constant evolution of a new urban artistic way of life, that is vey similar to ours.

Do you have any plans to expand your touring here in the States to other cities?

Mariano: Yes, we are planning to visit other cities in FL, and by late June/July New York, Los Angeles, Chicago, Austin and Atlanta. After we will also cross the pond to Spain and other european nations.

So it appears that your music has a very spiritual backstory and undertones. How exactly did your music come to be influenced by the afterlife, and how was it that it drove you to form this band?

Andres: We live in a world full of distractions and silly responsibilities that drives us crazy and doesn’t let us see the most simple and incredible things of this life. Like for example, to enjoy a sunset, or feel the fresh air… We were all living this fast paced life on the matrix. Until the spirit of The Great Master, appeared to each one us making it clear for us that there was more to life that what we have been experiencing. He transmitted his magic recipes to us so we could continue his legacy and message through the power of creating music. Rational thinking is obsolete to see the real presence of The Great Master.

Uriel: The master appears to us in different and crazy ways, for instance, the first time I saw him was during a sexual encounter, Andres saw him on a tree in a park in Mexico City, Mariano feels his presence through his own mustache, and Gonzalo receives his message via dreams. He brought us together having us perform with acts like Hot Chip, Friendly Fires, and next The Rapture but now we are in Miami performing together and loving it every minute of this magical ride. Those are the ways of the Master Timothy Brownie.

It says on your website that you strive to create an ‘organic’ sound. What exactly does your notion of this organic sound entail and how do you make it shine through in your music?

Mariano: Each one of us gives his ingredient to get the recipe complete.

Andres: It is organic, because it’s not planned, no producer behind us. Everyone brings their ingredients of sounds to the recipe and it starts to come together until a song is born. Once this magical recipe of sound is created then the great Master sends us signs/hints making us realize the name we should give it.
Uriel: It is difficult to explain, when two hands touch, is very difficult to describe the feeling. Like when you turn off the lights, if you wait for a few minutes, you will start to see clearly.

While listening to El Legado Mutante, we couldn’t help but be stricken by the many different instruments and genres you’ve engrained into your sound. Is there any particular kind of music that you haven’t necessarily made yet that has influenced you that you’d like to delve into with future recording sessions and albums?

Uriel: We listen to many artists and many types of music, but are influenced by things other than music. We are influenced by a smile, a tree, a sunset, the voice of a friend, a tear. We get vibes from many different things that give us inspiration to create our musical recipes.

What can the casual concert-goer that hasn’t experienced Timothy Brownie live come to expect from one of your performances?

Gonzalo: When you come to our shows you will start to feel the music enter your body, making you dance uncontrollably. With that said you will forget about everything, get a little crazy but have a HUGE smile on your face which will last all the way home.