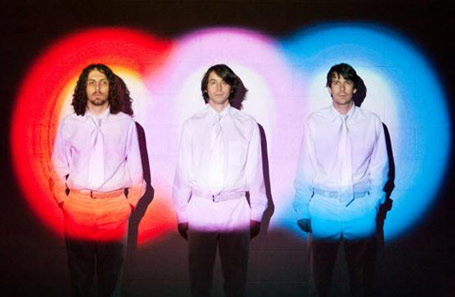 Opening up for Mayer Hawthorne next week is a musically rich trio called The Stepkids, and we have taken it upon ourselves to have a chat with Dan Edinberg, (keyboardist/bassist) to get to know them a bit better. They are a band with a soulful groove dripping with psychedelic nostalgia-and we can’t get enough. With a self titled full length debut released in 2011 on Stones Throw Records, they danced their way into the spotlight of funk, soul, psychedelic and jazz lovers, or anyone who likes to boogie. And in it, their musical skills are evident- all members having weaved throughout the industry’s circuit. “Jeff (Gitelman), our guitarist, toured with Alicia Keyes and Bobby Brown and all that, so he was all up in the R&B world. I scored for a more indie rock kinda thing for a few years, and Tim (Walsh) was actually making a lot of solo records where he played all the instruments. It was funny because Jeff was getting to a point where he was getting sick of R&B and I was getting pretty sick of indie rock. We knew that we wanted to meet in the middle somewhere, and we just started record with Tim, who was already up on the engineering of stuff,” Dan told me.

And with that fusion of styles and experiences, The Stepkids were born with a founding principle of focusing on the band as a whole, an entity if you will. In their debut, this idea prevails as their blending vocals harmonize and they deliver full and hearty tracks. Though this notion was in the forefront then, The Stepkids don’t want to make the same album twice, and are always evolving. In context to their musical future, Dan elaborated, “We really just want to carry out our careers in a multi-faceted way.”

In further talk about the future, we ventured into conversation of their next album, which he mentioned has a bit of influence from Steely Dan, and was recorded in a more planned out way rather than the jam band/improvisational approach of the last. “We’re just trying to keep things moving forward in an interesting way. Album number two, which we’re almost done recording, we’ve developed our styles even more. We’ve incorporated more modern sounds, more modern elements of the frequency spectrum. We’re also featuring ourselves slightly more as lead vocalists than we did in the last record.”

Will they debut any new tracks in the shows to come? He didn’t say. But one thing concert goers CAN expect, is an extremely sensory and visual live experience. With colorful live projections that embody the music’s true life, fans are wrapped up in the sounds through more than just listening, feeling it fill up the space around them.  And on May 8th, Miami music lovers can feel it too.

One Response to “Interview: The Stepkids”