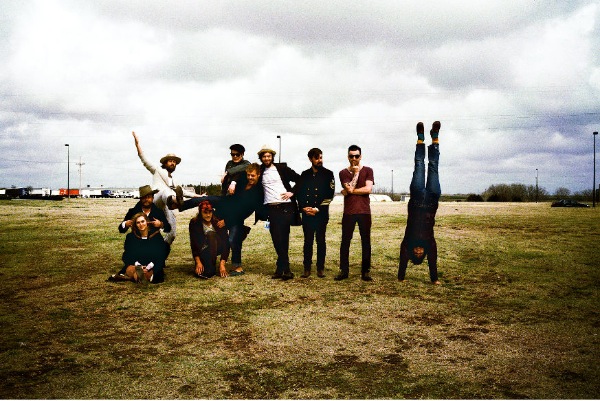 In preparation for Hangout Fest in Alabama this weekend, we wanted to get a deeper look into the world and future of one of our most anticipated bands of the festival, the 12 piece band, Edward Sharpe and the Magnetic Zeros. Luckily for us, drummer Orpheo McCord was kind enough to have a chat, and discuss just that.

Their debut album, Up From Below, with the strength of the single “Home,” carried them three years about the touring circuit. I had to know whether the extensive tour was a plan, and just how they lasted on the road for so long. He responded, “It was an opportunity to go out there and do what we could do and share what we love doing with others, and as the momentum grew, you know, we just kept moving forward with it.” adding, “By the end of those three years we were definitely pretty exhausted, and pretty exhausted in playing the repertoire that we had, which wasn’t that extensive since we’d only had one record out.”

Then he went on to tell me about recording the upcoming album in their homemade studio in Ohi, California- “We just kinda went in there, made a rough list of songs and ideas, and just started kind of knocking them out one by one with no particular format. And then we decided to record as many songs as we can, and at the end of it all we’d just kind of figure out what we’re gonna do. So we just kept recording, and recording and recording, and all of a sudden a couple months go buy and we have like 40 songs,” which, through further discussion, they split into two albums that would be released fairly close to one another, he explained.

But before all that, amidst the ongoing tour dates across the country, a new form of touring emerged- touring by train. The Railroad Revival Tour used rentable train cars dating back to the 1950s, that together spanned about a quarter mile long. Boarding the railcars with new friends Mumford and Sons, and Old Crow Medicine Show, the bands all interconnected and had nightly jam sessions till the wee hours of the morning, playing more music- he guessed – then at the actual gigs. Though the trains took longer to get from location to location, it provided a homey feeling that wasn’t available on lengthy bus rides. “It was so fun to hang on the train. It’s not like in a tour bus where you wake up and you’re still driving and you’re like “ah I’m sitting down and I just want to get off this bus”. It was- get up in the morning and see a beautiful countryside where ever you are, have a cup of coffee, and get this great view out the window. It was just totally magical.”

That magic was then captured in a documentary of the tour that debuted at this year’s South by Southwest. That documentation wasn’t their first interaction with film and video, during their first  album Up From Below they created a three part musical called Salvo, using the tracks to illustrate a beautifully shot narrative. Upon inquiring if this incorporation of video was an important value to the band as a whole, he answered, “Absolutely. That cinematic aspect is very important to us, and just the multimedia sensibility in general, because all of us are pretty creative folks, and we all explore other mediums of art-whether it be visual art or cinema, or photography. So that’s a thing we’re always talking about, and there’s definitely some ideas and lots of different stuff being discussed now, and the music video for “Man on Fire” (which they just played on the Letterman show last week) is gonna be pretty cool-very cinematic.”

Front man, Alex Ebert (no, his name isn’t actually Edward Sharpe) has mentioned a theme of spirituality in one’s self for the upcoming album, Here. I couldn’t help but wonder if this spirituality was already prevalent in the band from the start- because of their nearing gospel and celebratory radiance shown in live performances with every member invested in the music in a way that seemed deeper than just a career, something much more transcendental. When I asked him if he felt the same, he elaborated saying: “We’re all very individual and have strong characters in this group, but there’s a certain like mindedness, where we are all on some sort of spiritual path. I think we all feel the oneness and the need to connect it to each other and to all of the world. And we also can feel that separation sometimes, and we all really have the intention to transcend that. We do that on an individual level as well as on a group level with each other, and through the process of playing these shows with other people and connecting- it’s a pretty natural process for us. It’s a very big part of what this music is and will continue to be for us.”

Nice job. Deep, but not corny-hard to do.

Great article! The writing is fantastic… I don’t find myself reading about bands I’ve never heard of too often but I’m glad I readt this. I’m definitely gonna check this group out, especially the documentary! That’s so cool.

Leave a Reply to Carmen Presti