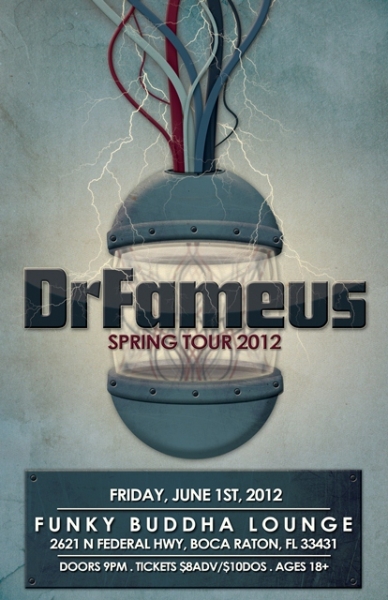 Brotherly Love Productions presents Allen Aucoin’s latest project, DrFameus, for an extra special intimate evening at the Funky Buddha Lounge & Brewery on Friday, June 1st. If you’re unfamiliar with Allen’s work with the Disco Biscuits you should know that this year’s AURA Music Festival alum was handpicked to replace their founding drummer and take the wheel of one of the scene’s most progressive jamtronic powerhouses. The redheaded wonder drummer’s robotic precision attack has earned him nicknames like “The Gingerbot” & “The Machine” and he’s studiously broken down the wildest Drum & Bass and Jungle beats produced in the early 00’s, reproducing them on his kit.

He will be joined by Atlanta’s electro-folk troupe, Stokeswood, who has roots in SoFlo and left an impression on Boca when they performed two shows at the Buddha in early April with J2K and Arpetrio.

3. The winner will be chosen on Friday,  June 1st at noon