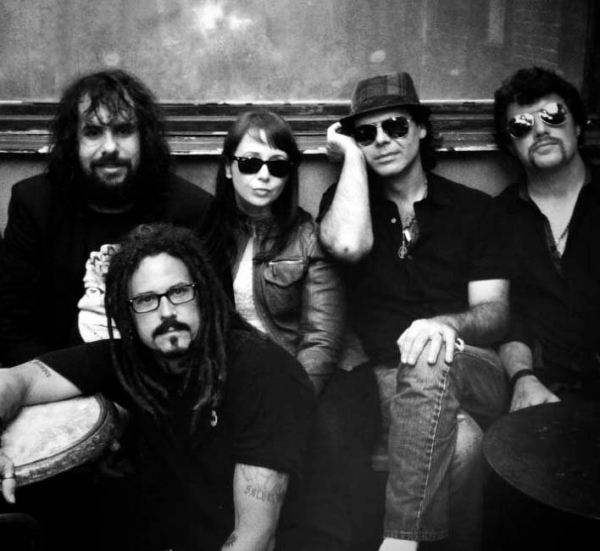 Capturing the essence of 70′s vintage rock and coupling this sound with a modern edge, The Chris Alvy Band has taken fans on a musical journey through 4 full length albums and generated over 10,000 independent sales in a short amount of time. Through catchy choruses and sophisticated harmonies it’s simple to see that their latest album Art Noise is definitely of the timeless variety.

Where do you find the inspiration for your lyrics and style of music?

Chris: I think my inspiration most likely comes from the bands and sounds i grew up with around my house. My parents always had the beatles,david bowie,jethro tull,the stones…..all the classic stuff from the 6o’s and 70′s was always in the background when i was a kid. That upbringing is what inspires my music sense of arrangement and melody, as far as lyrics, my inspiration has always been my surroundings and what i am personally going through at the time.

You guys seem pretty opposed to the norm. So what message are you trying to send by playing covers of other local bands music?

Chris: If the norm is the crap I hear on the radio or I see at these lame award shows, then yes, I am totally opposed to it. We have no message in our music, our only message or goal, has been to write timeless songs. Good music is our focus always…I think we’ve done a pretty job on our cd ART NOISE and I believe we can only get better. As far as covering the locals, well, again, we are not only a local band, we are also fans of many of the bands around town. So I came up with the idea to cover some of our favorite artist here in Florida. I must admit, we’ve slacked a bit, just because we’ve been very busy performing, but we will eventually get back on that. We managed to do Dreaming In Stereo’s”Lazy,” and we did Kim Drake’s “Modest Man.”  Soon we’ll have another one out.

Fernando, how do you manage to juggle a record label, tour, and be in two bands at the same time?

Fernando: Music is my life. I have no day job, so I produce bands and work with my artists. I’ll sleep when im dead. Im a card carrying member of 2 bands right now Dreaming in Stereo and Chris Alvy Band. Chris Alvy Band is the rock band I have always wanted to be in which lets me take Dreaming in Stereo into more of a singer songwriter vibe wihch suits my voice better. Aside from playing a lot I produce and the label is an easy job to run being that we don’t really have a lot of money at our disposal.

Not many bands pay attention to charities let alone hold full-on charity benefits that tie into their shows, why is it so important for the band to do this?

Chris: We need to give back to the community and help those in need, it’s a human thing. Our celebrity helps to make people listen and bringing entertainment to the people is a charity all its own.

Having performed at the International Pop Overthrow last year, what was the difference between touring in Miami and touring in California?

Chris: In California, people actually go out to see music.  In Miami people go out to party. We prefer playing to people that want to listen and not talk over the music. Plus the International Pop Overthrow people eat us up because we make traditional power pop music that has a classic sound. Beatles, Cheap Trick, Todd Rundgren, Big Star, Elvis Costello , Jellyfish, and The Grays are our faves and our fans favs.

Your latest album Art Noise is very melodic and is not the average rock and roll album, how has living in South Florida influenced this?

Chris: Living in Florida has not influenced our sound or our way of writing actually. If it did, we’d probably be doing more dance/trance or latin vibes.,oh I forgot reggaeton. Our influences come from the 60′s – 70′s and actually even 80′s. I mean I love The Knack, The Romantics, The Pretenders, etc. I find no inspiration or influence in our music that I can attribute to living here in South Florida, not to say I don’t love Miami, and Florida.

Chris: I happen to be a fan of many of the local bands around town. If i did not like the music I could’t support it.I love the fact that there are some cool sounds coming from our own neighborhood.  Off the top of my head I know I dig The Deadly Blank (which we’ve done many shows with) Space Between Words & Radioboxer also come to mind.Very original sounds. Always liked Fernando Perdomo’s Dreaming In Stereo.These bands  being more on the rock vibe. On the more pop or r & b one of the best on the scene would be Robert Elias & the Revenge, and of course Jacob Jeffries band has always impressed me. I really like whats going on in the scene at the moment. I feel there’s a momentum going on that certainly was not here a year or two ago, and Chris Alvy band is happy to be right in the middle of it. Proudly announcing that “there is rock & roll in Miami.”