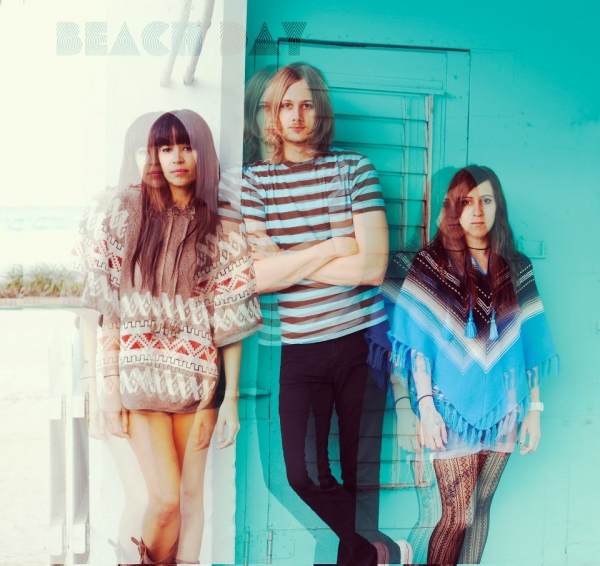 Who says South Florida can’t get any sunnier? The heat may be a killer, but cooling off with local surf rock band, Beach Day sure isn’t. They’ve got a gritty 60’s groove and sweet gum pop vocals that any girl group lover or garage band junkie would fall on their knees for. Luckily, they hail from Hollywood, (or as they put it, Hollyweird), Florida, and we get to snatch up that sun soaked sound live at local venues and events, including Record Store Day! So get to know your new favorite beach buds beforehand, and find out why we are enamored with their sound.

Now, there are quite a few bands floating around the internet with a self proclaimed “60’s surf rock” genre, but Beach Day seems to really nail that 60’s sound to it’s core. What are some of the bands that keep you rooted to that vibe?

Kim: Some of the bands that keep us rooted to a 60′s surf rock/garage vibe are The Shagri-Las, The Ronettes, The Sonics, The Ventures, The Ramones, basically anything from the 60′s with “The” in front of it! Just kidding!

Recently you’ve stepped up from the local scene, and have opened up for some pretty notable acts like Surfer Blood and The Black Lips. How has it been sharing the stage with them?

Kim: Well I’ve never really thought of our band as a “local” band per say. Touring is our big priority! We try to get out of South Florida to play as much as possible! As well as enjoying what we have here. There is truly a lot to offer here. We loved sharing the stage with The Black Lips and Surfer Blood. It was an amazing opportunity to be able to score those opening slots! It was great opening up for The Black Lips to an excited, crazy, energetic crowd! That’s what we always bring to the stage, lots of energy and fun. We like to think of our show as a party. We have no serious, angsty, whiny songs! We just like to get the crowd dancing, drinking and having a good time! It was nice to get that energy back from a crowd!

This weekend,  you’re playing the highly anticipated Record Store Day at Radioactive Records in Fort Lauderdale. Why was it important for you to get involved with Record Store Day?

Kim: We’re super excited to play Record Store Day at Radio Active Records! It’s been one of our favorite record stores for a really long time. They have the best selection and ambience in South Florida! Mikey
orders rare cd’s, records, anything your heart desires. And my heart desires strange records that I can’t find anywhere, quite often! We think Record Store Day  is really important because we all need a place
to get our vinyl fix. And supporting record stores for just one day out of the year is a really worthy cause! Also, it’s a whole lotta fun to see bands, eat food and buy stuff!

Next week you are heading all the way back to sunny California for a second time.  What are you looking forward to most?

Kim: We’re really looking forward to playing shows, exploring more of Los Angeles, recording songs, hanging out with friends, good vegan restaurants, so much stuff! We had so much fun there this past January! I also want to go watch some surfers at the beach. That’s one of my favorite things! And I want to go exploring in the desert around there too!

The last time you visited California you recorded two tracks at Ultrasound Studio. Now there’s talk of an intended album release in May. Are the rumors true? ( will there be a new album, if not are you working on one, etc)

Kim: Well, there is some truth to those album rumors! We’re going back to Los Angeles to record the rest of our debut 10 song record at Ultrasound Studios. What’s so awesome about Ultrasound Studios is the fact    that they have an echo chamber, which means we’ll have no digital reverb on our whole record. Just like in our first two tracks that we recorded there. There is no digital manipulation of any kind. We’re recording just like they did in the 60′s. We like to think of our producer, Gregg Foreman as the next Phil Spector!  The record definitely won’t be out in May though! We’re currently trying to find a label to release the record. There are definitely a few labels interested. Which one will put it out and what date will remain to be seen! We’ll know once the record is finished in May!

On one of your recorded tracks, “Boys,” we can hear some groovy organs. Is this a hint at some new musical explorations on the future album?

Kim: Yes, definitely! Our album will have lots of organs! We’ve been trying to find an organ player that will fit in with us, is able to tour and can make the commitment with us. That is hard to find, but we’re diligently looking!

One musical endeavor you’ve mentioned you won’t be venturing into, is electronic music. Being quite the prominent sound in South Florida, how did you find yourself breaking out of that mold to play surf/garage music?

Kim: Electronic music has never been part of my mold! I’ve never really gotten into it. Except for maybe some Moby. I always just played guitar, piano,  you know, real instruments. I have that skill set, so I never really tried to make music in an electronic fashion. Nor, have I wanted to. I just really love the primitive sound of an electric guitar and drums like in 60′s garage music. There’s something so magical about a good song just being played. No bells, whistles, smoke and mirrors. Just a good song.