Local Spotlight: Axe And The Oak 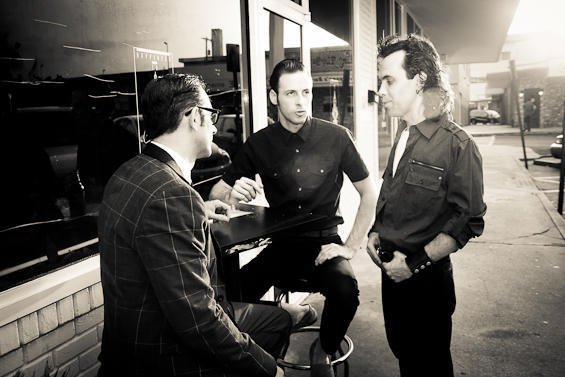 Rockabilly South Floridian band Axe And The Oak has definitely been making headlines with their music. From heavy guitar twangs to haunting vocals, this band sounds like they came straight off of a Quentin Tarantino soundtrack. With songs like “Vampire” and ” Ghost in the Fire,” their vibe is sure to make you feel like you’re playing russian roulette in a 1950′s ghost town.

What have you seen over the years musically in the area thats brought you all to where you’re at now?

Myles: If you mean local influence thats difficult. Mostly because although we are very proud of being from Miami it doesn’t enter much into our writing, well not consciously anyway. People are always surprised when we tell them we are from Miami. I guess they expect us to be from somewhere a bit less sunny. One thing locally that has helped bring us to where we are is an incredible musical energy in South Florida right now. Lots of folks playing all kinds of great music. Living in that creative environment pushes you a bit.

The band has been noted saying, “We always strive to add to the grand tradition of all things spooky and twang.” What exactly does that mean?

Sander: Actually, a friend of mine overheard a couple of older audience members having a serious discussion about our sound. (This is early on, before we figured out what we were really after.)He quoted one of them as saying something to the effect of: “These guys have that dark, death rock thing happening, still surf though, Twang ! You know, in the Grand Tradition.” It just made sense. Axe and the Oak has always been rooted in Twang and Post Punk. The tradition is that common thread between the likes of Screamin’ Jay Hawkins, Dick Dale, The Birthday Party, Bauhaus, Echo & the Bunnymen, David Lynch and Tarantino that we hang on to.

How do all three of you juggle having day jobs like firefighting and carpentry and still manage to make music and tour?

Alex: We’ve had plenty of rehearsals where Myles has just come off a 30 hour shift and our songs are interrupted by a few pages from the hospital.  In addition to carpentry, Sander has an amazing 2 year old daughter so he has his hands full as well.  But as much as our careers may cause scheduling conflicts, they also provide a lot financial freedom and stability. There is no juggling really we have to make music. So we make music.

What musical influences have really impacted your careers in this industry?

Myles: In relation to “careers” in the industry I would have to say Bands like Fugazi, Rights of Spring, Soul side, Shudder to Think or in general the homegrown music scene of Washington DC of the late 80s and early 90s. I listened to those records incessantly in Jr. High and High School and something that stuck with me was the DIY attitude of that scene. The idea that you could build something amazing and communal without big dollar support from the outside. Press a record, put it in sleeves in your Mom’s basement and get it out there on a large scale. It seems almost silly now because it is so common place, especially with the major music business in a bit of disarray, but they really made a point of letting kids know that they could do the same thing in their town

How did your relationship with Radio-Active Records come about? What was it like releasing your EP on Record Store Day last year?

Sander: I left a demo CD at the counter one day in hopes of maybe getting us a casual in-store gig. When I found out they were playing it in the store rotation, I rushed over with a proper master’d version. We got into discussion about finishing up the production in time for Record Store Day, and were invited to play. It was a really good time, it had been too long since we experienced that much enthusiasm for a local show and vinyl! Those guys are awesome, true supporters of the scene.

You recently opened for Zola Jesus at Bardot in Miami, how was this experience for all of you?

Myles: That show was a lot of fun. As always its exciting to get to play with an artist who’s music you really respect and enjoy. It was also a push forward for us in terms of song writing. Alex played a bowed saw on a song and I played some guitar so there were some fresh sounds for us in the songs. We also played some newly finished material for the first time so people who had been seeing our shows for a while got a little glimpse of things to come. It was definitely exciting to be expanding the writing in that direction. Bardot was a great venue too, it was like playing in someones living room, very intimate.

It’s yours, enjoy it, be proud of it, share it. Every band is local somewhere, U2 is from Dublin right….