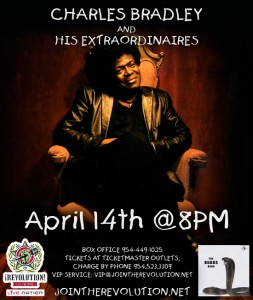 After Charles Bradley’s breathtaking SXSW performances last year, he garnered the attention of everyone, and we immediately feel in love. It’s not everyday that a 62 year old releases his debut album. That album was released two years ago, but since then he has had a real buzz surrounding him. He is commonly referred to as “The Screaming Eagle of Soul,” with his funk/soul/R&B singing. This past year, a documentary about Bradley’s life was selected by SXSW and debuted this spring. Take a second to watch the trailer below.

Label mates, The Budos Band is an instrumental band recording on the Daptone Records label. The band has ten members (up to thirteen members at times) who play instrumental music that is self-described as “Afro-Soul.”

( Don’t forget to tag us so we know you have posted it.)

3. The winner will be chosen on Friday at noon