The Broadcast & The Fritz Review at The Funky Buddha 3/15 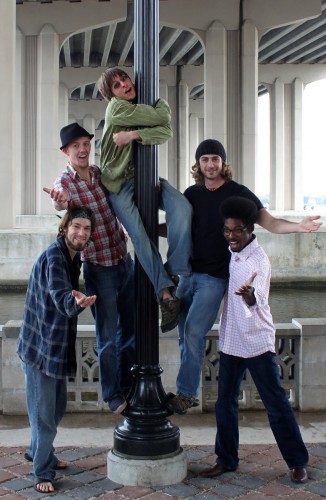 Hailing from Asheville, North Carolina, The Broadcast boasts 6 members including bongos and a female vocalist. During set-up this combination had us on the edge of our seats waiting to see what was next. Being a rather unknown band to most mainstreamer’s musical palates, the crowd was skeptical and reserved at first. But with dark lighting and opening lyrics like, “I just wanna dance all night,” people loosened up and opened their ears. Caitlin, the lead vocalist, commented at the beginning of the set that they were a “Rock n Roll band,” which is not something I would classify them as at all. If anything, their sound was of a jazz fusion band stirred together with a non-British Joss Stoneish type of spoon. This, when coupled with Caitlin’s crooning voice, would then lurch into a bongo breakdown, which left me utterly confused and feeling like I was at a Gloria Estefan concert without my salsa dancing gear on. I also felt several of their songs to be unfocused and disconnected from the original Soul vibe the band seemed to have been going for. A few songs down, the band tried to conquer MGMT’s “Electric Feel,” which I think should’ve been left to its rightful owner. Throughout the show, the band clearly lacked a consistent style, which led the crowd to lose a bit of interest. The only rock I heard during this set was with their closing song, a cover of The Rolling Stones “Sympathy for the devil.” I felt it quasi disingenuine to close a set with a song not their own. But overall, I believe each band member to be talented in his or her own way and a little refocusing couldn’t hurt anyone.

Next up, The Fritz, had us waiting around for a hot minute to finally open up with quite an enlightening sound. Immediately, people stood up, tables were moved, and the dance floor was ready to go. This band, also having bongos, but only 5 members, was quite different from the last. At first, the band overpowered keyboardist and lead vocalist Jamar Woods’ soulful sound, which I wanted to hear more of. Afro clad, hair pick, and a mixture of John Legend’s and Daniel Merriweather’s vocals, he had me intrigued from the get go. Readily feeling like I was on Soul Train, this set was full of attitude and dramaticism, from the music to the facial expressions of each band member. The crowd definitely wanted the funk and with songs that ranged from eight to eleven minutes, their breakdowns were guitar heavy and seamlessly harmonized with keyboard synths. Halfway into the set, the band did their rendition of Prince’s “Kiss,” and had everyone wanting to be just that; kissed. The fact that the band looked enthralled and engaged influenced the crowd with that same emotion. The room was so dance filled that this show would’ve left Don Cornelius himself proud.