Review: Orange You Glad Festival with Grimes and Born Gold 3/7 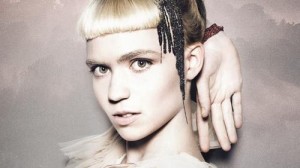 Last Wednesday night in Orlando, walking past a slew of bars bludgeoning my ears I escape into the alcove of Back Booth to be greeted by hipsters so densely packed friendships were immediate. Reminiscent of a colonial bar, Back Booth’s main room, flanked by the bar on one side and elevated platform on the other, and is lit only by four little lamps set to the lowest settings. A video of Snoop Dog eating friend chicken loops on the screen as Michael Parallex sets up.

Michael Parallex’s set is complete with pounds of glitter, bathrobes passed out to the crowd, a DJ table laced with Christmas lights VJ-ed in time with the music, balloons, and some pulsing music that frenzied the entire crowd into crouching down, jumping up and huddling around his little sister. Why not, she’s a doll. He joined the crowd to dance in front of his table reaching behind himself to adjust the music. And as he performed he peeled layer after layer of clothing off revealing different outfits every time, from an alter boy, to a basketball jersey, until topless. After his vivid set, Born Gold began to set up.

Barefooted Cecil sets up his Kinect facing himself at the back of the stage, used to control different aesthetics of the show. Wearing a leather belly-bearing jacket donned with a mini MPC on his lapel and two Iron-Man-Inspired light beamers in his palms. As the crowd and music begin to warm up he brings dance moves heavily doused with some 90′s boy band moves and a sense of K-Pop. Never moving from his plot the other two members routinely went into the crowd covering them with a sheet. As the show continues, there’s an instrument mounted on a shovel while as one member walks through the crowd on stilts. For percussion they donned helmets, and while  facing each other used drumsticks to alternatingly pummel each others heads. When they played their most loved song ‘Lawn Knives’ both children and parents were forced into a jittery dance along with the entirety of the crowd.

As Grimes gravitates to the stage the crowd pushed tighter towards her. Her rainbow infused blond hair and camo jacket adorn her as she doubles over onto her table, peeling away at the lyrics with such a soft whisper and lisped voice it had a way of making your knees weak. As ‘Oblivion’ began Born Gold joined her onstage and helped pick up the pace. After her last song the crowd lingered around hoping and chanting for an encore. Grimes came on stage sadly to announce that she had no other songs to play for us, and at that most of the crowd drizzled onto the street to discuss their upcoming plans for the festivities to ensue.