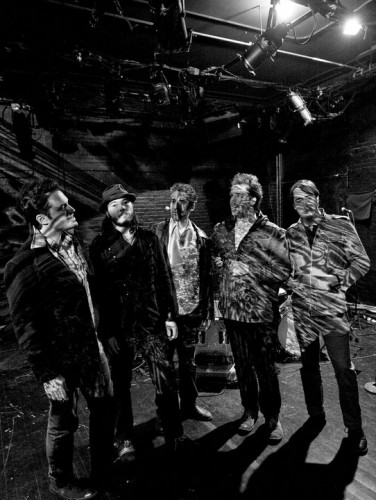 A gaggle of percussionists come to us as Caveman, a deep throbbing band with songs that seep their instruments in from start to finish. These Brooklyn men have accumalated a thick following after only one debut album, Coco Beware and I’m sure we’ll all stick around for their next one too. We’re psyched to be able to chat with them for you to get to know these men and their music a little bit better.

How did you gentlemen come together as Caveman since you were mainly in other bands previously?

It feels as though the cosmos shone down upon us, as men. We’ve logged many a man-hour hanging with one another, so it seemed only natural that at some point music would come out of it.

What’s different about Caveman than your previous bands?

I think our approach with this band is definitely informed by all of us having been in bands before. You learn from mistakes and triumphs alike, and with Caveman I think we just know that the team is the most important thing. We’ve all got to be happy and excited and looking out for each other twenty-four hours a day. And that’s the key to loving life.

You’ve already played with some bigger names (Edward Sharpe, someone told me Blue Oyster Cult?) how did that feel for you guys?

In reality, we’ve actually played with a lot of smaller bands — I think between the five of us, we outweigh the majority of touring acts.

Your debut LP CoCo Beware was released in November. Who is CoCo?

CoCo is that unmatched quality in all of us, that je ne sais quoi that helps us take it to the limit. It’s the rug that ties the room together. But we must be wary of the influence wee CoCo wields over us all. Hot to the touch like fire!

How did you go about putting your record out on your own, and why?

We had been talking to some people, and we realized the vibe was within all of us. At that point, outside sources could only disrupt the vibe.

How did you come up with the video ‘Easy Water?’ Is that what you thought of when you wrote that song?

Our good friends Bianca Butti & Bryn McKay came up with the concept after being inspired by the song. It was out of our hands in a beautiful way. They basically manifested what we feel mid-jam.

You are starting off on a pretty substantial tour, how do you prepare yourself for that physically and mentally?

Collectively, we’ve been preparing over a century for this. That said, stretching and chanting never hurt.

Will you be catching any shows during Orange You Glad Fest this weekend? If so, who?

One Response to “Orange You Glad Fest Spotlight: Caveman”