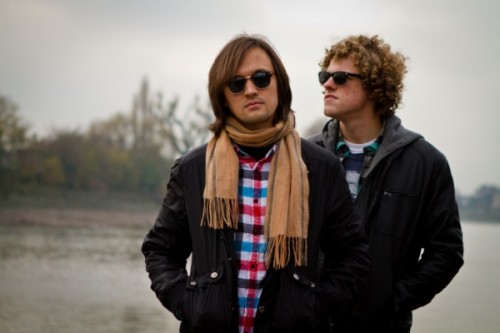 Meet ANR, Awesome New Republic, a two-piece rising indie band from our very own University of Miami. The band consists of Michael John Hancock and Brian Robertson. Their music stimulates a certain empowerment for me, from their trumpets, to their lyrics such as “keep your toe nails on the ground, keep your fingers up in the air,” and their music videos are almost as intriguing as their music. The world won’t be a just place until these extraordinary musicians get all the attention they deserve.

How did you two meet and get started with Awesome New Republic? What were you doing before ANR?

We met in college in Miami playing in other bands. We both were essentially doing the same thing only not with each other before ANR.

Where did the name Awesome New Republic come from?

It refers to an ideal people’s movement for our consistently challenging times.

Seeing as there are only two of you, how do you guys recreate your sounds live?

We’ve recently added a third member to our live set-up, on drums and keys and vocals, so that helps a lot. Until now we were compromising a lot, making different versions of the songs for live purposes.

Tell us about your recent tour, what was been your favorite show so far?

We had a really good time playing the Neon Gold show in New York during CMJ this past fall. We get along really well with a lot of the acts that were on that bill, plus I smashed my guitar which was cathartic / nostalgic.

Apart from being rockstars, what do you guys do in your free time?

If we’re not working on ANR, we’re usually working on some other musical project, either on our own or with other friends from around town.

I read something about the album concept resembling Star Wars?

I think you may be referring to the Rational Geographic EPs from a few years ago, yeah? There were references to Star Wars throughout those songs, yeah. Pretty loose though, was just watching more Star Wars than usual at the time and it got in there.

In 2009, your album Rational Geographic was promoted through BitTorrent. I understand that this is first time a record label has actively advertised a band directly to BitTorrent users. Presuming you are in favor of free downloading, how do you think musicians should support themselves in this new industry?

It was an interesting experiment, mostly highlighting that file-sharing technology isn’t always about pirated material. I’m still not sure if we learned anything from it, though it was interesting to get to know someone who runs a sight like IsoHunt on a personal level, rather than as an anonymous file-sharing entity.

You have six albums out, how has your music evolved since your debut in 2005?

We’ve gone from recording on an 8-track back then, to recording in a bedroom, to where we’re at now, recording in a legit studio. That’s been the major factor in our sound evolving. Other than that, I think we’ve mostly been sticking to the same ideas since we started writing and recording as ANR in 2003.

You have such impressive music videos, for example “Digital World and It’s Around You,” which was filmed with local Borsht Corp. How is it like to shoot them?

Thanks, Lucas and Jillian are great, as are the rest of the Borscht peeps. We’re on the same page on a lot of things, and really enjoy working with them on our videos and helping with the music for their projects. It’s a great vibe of reciprocity that they emit and lasso in.

Congratulations on being selected for SXSW. Tell us about your previous experience with SXSW?

Thanks. We played SXSW for the first time last year and had a pretty good time. Austin is Texas Chainsaw country, so just driving into town is a trip. This year will be more enjoyable as our buddies Plains are gonna be on tour with us and some of our other Miami cohorts are going to be in town as well.

We’re mostly working on making a new album. That’ll come out this year at some point, but we’re still really just getting into it.

What is your favorite venue to play in South Florida?

…it’s a key factor in defining the character of a community and is something to be proud of.

Thanks for ones info, I’ll be checking in..thanks