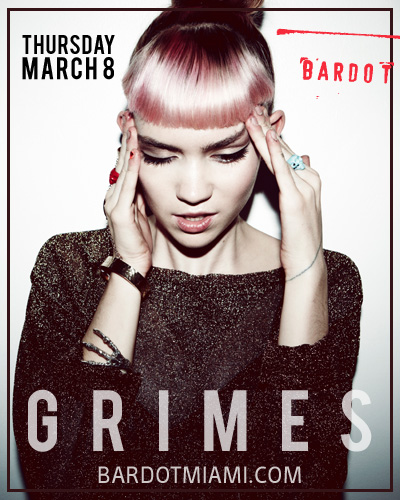 Fresh off her critically acclaimed album Visions, Montreal electro-pop prodigy Claire Boucher aka Grimes comes to Bardot this Thursday.  Visions arises as Boucher’s fourth release in less than two years. Each album tackles a different set of influences and styles. Her newest album, Visions, incorporates influences as wide as Enya, TLC and Aphex Twin, drawing from genres like New Jack Swing, IDM, New Age, K-pop, Industrial and glitch. This approach has marked Grimes as a curator of culture, and allowed the project to remain flexible and evolving.

( Don’t forget to tag us so we know you have posted it.)

One Response to “Grimes Ticket Giveaway”

*That truly be a perfect birthday win*