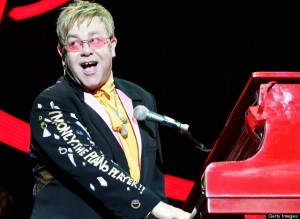 The Elton John show at BankAtlantic Center last friday was a colorful one, to say the least. It brought together casual listeners, to discography owning Elton fanatics, who- like one man in particular, belted out each lyric and banged in time on his imaginary piano. But before the legend would perform, he had a short opening act named Cellist. They were two of his cello players and they did a small set of covers with their instruments alone. Playing, “Smooth Criminal,” “With Or Without You,” “Smells Like Teen Spirit,” and crowd pleaser “Highway To Hell,” they set the tone nicely for an energetic evening.

After their four song set, there he was- striding onto stage clad in a fully sequined purple jacket and dark sunglasses, he glimmered. Elton hasn’t really changed throughout the years. Launching straight into “Benny and the Jets,”  fans broke into an air piano frenzy. This choice of set opener foreshadowed the kind of show it would be- brimming with the all time favorites.

Leaping up from his piano bench to acknowledge the crowd after each song, he even strode toward the back of the stage where many fans had also been seated. Throughout the three hour show, he flaunted his undeniable technical abilities, as camera zoom-ins showed his fingertips flick the keys surfaces intricately and effortlessly. Scaling up and down the piano as the cello players struck at the strings with their bows in time, the evening was of an extremely high musical caliber. Though he did avoid some of the higher vocal notes, his piano playing was on a level of it’s own.

Fluctuating in and out of long instrumental interludes, it never felt like elevator music, rather, fans always danced along. Screens above the stage hosted extremely cheesy and dated images but it never took away from the show, because Elton John needs no embellishments, he IS an embellishment.

About six songs into his set, he announced, “This one’s for all the ladies out there,” and proceeded to croon, “Blue jean baby..” to which the crowd roared in delight before singing along to the famous “Tiny Dancer.” He also played classics like, “I Guess That’s Why They Call It The Blues,” which offered up the most hand holding sways, “Philadelphia Freedom,”  to which fans leapt from their seats to dance, and, “I’m Still Standing” to which everyone grooved along to. But perhaps the loudest sing along was the definitive, “Rocket Man,” to which fans threw their heads back, and reaching their arms out wide belted the chorus dramatically, or was that just me? One paramount factor that made this show so significant, was that it really exemplified just how many hit songs Elton has. You never really realize, until you’ve seen him live, how many songs you can honestly say, “I LOOOOVEEEE this song!!!” to. Maybe you can, but experiencing those timeless songs live makes the sentiment even stronger.

One Response to “Elton John Review at BankAtlantic Center 3/9”

Enjoyed your reveiw. Huge EJ fan, going 3-16 with my son to see him at RBC Center.

Leave a Reply to Len Taylor