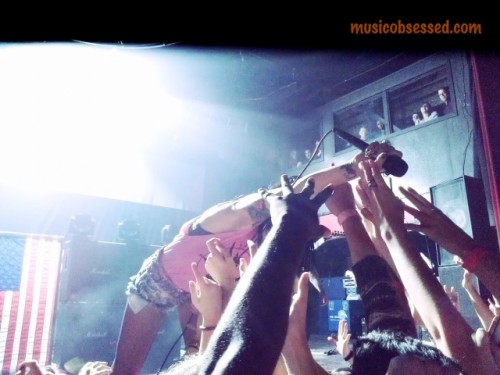 Revolution should probably put in for a maintanence inspection, because after this weekend I would not be suprised if theres a few pipes loose, cracks in the foundations, maybe even some limbs under the stairs. Completely ignoring the fact that on Friday, Dub Vibes tore up the floorboards, we can only imagine that Sleigh Bells along with openers Liturgy and Jacuzzi Boys did some damage.

There’s something about Revolution on a Saturday night. You walk in for a show as the adjoining venues pulse with music haunted with loud laughs from women old enough to be your mother hitting on men young enough to be your brother. Revolution itself is a shadowy grotto for music. The ambiance of dimly underlit bras is rather romantic, and by the time the first band comes on you’ve found a nice perch and can enjoy some music. That is unless the opening band is Liturgy. Almost everyone in the crowd had a concerned look on their face when Liturgy started up, “Am I at the right show? Are they howling actual words? Where’s the bar?”  It was out of the ordinary for these poor little rock-hipsters. Perhaps it’s because I grew up in New York with this rock-in-your-garage sound, or perhaps it was because I had already had a few girly drinks, but I was enjoying them. The venue was all wrong. They needed somewhere darker, with more drugs circulating around, somewhere that would appreciate their trance and indie version of black metal.

After a set that increased drink sales dramatically, Jacuzzi Boys took the stage and in the wake of that afternoons loss, had scribbled “Whitney Houston” on his white tee. For a three piece band they had a deep seated sound, very dimensional. These boys made their Florida roots well known as a the group of people around me, statues for the first set, became limber beach bums completely embracing giddiness. I felt tanner just listening to it. And when they performed their hit ‘Glazin’ everyone was turning around to their friends, smiling and nodding. Probably an inside reference to the “official” music video they had playing in their mind. Every inflection of the band was heard and felt to the crowd, from the tiny tambourine hits, to the huge grins on their faces. And it was reciprocated wholeheartedly.

Sleigh the freakin Bells. With only red lights filling the entire theater Sleigh Bells assumes their positions. Literally, EVERYONE is in the pit. I barely fit myself onto the stairs as “Riot Rhythm” begins to peel faces off. I fell off the stairs, and thank goodness it was so densely packed in there I couldn’t have hit the floor if I wanted to. What better place to review a show than from right in the middle of it? So into the middle I went, lord have mercy. Peering up at the stage, Alexis is the epitome of a badass. Cutoff acid washed jean shorts, jet black hair, leather jacket. Joan Jett wishes she looked this cool. And poor Derek, him and half his ribs were still delivering every ounce. The Paradise Lost Tour had an odd sense about it in that it was touring with an album and songs that had yet to be officially released, especially with Reign Of Terror being the bands Sophmore album it has a different feel than Treats. Much more coherent and 80′s. As a whole the crowd tried to sing along to it and I’m pretty sure they’ll be downloading it on Feb 23rd, but they came here for the Sleigh Bells they know and love . After a 3 second pause, the whining synth that opens “A/B Machines” can be clearly identified, and I was seriously fearful.

One of my shoes was peeled off my feet, and I didn’t even try and look down for it. I marked it off as a casualty, and continue to dance because the threat of being crushed is not even a threat, it is very possible. This mosh pit was so fluid the whole of the crowd was enveloped. When I say the whole of the crowd I mean everyone. During “Rill Rill” I trip over something that’s not a beer can…it’s my long-lost shoe!  For their encore performance of “Crown On The Ground” she is held up by her fans as she pulls the evening to a close. After Sleigh Bells left us for the evening most of the crowd began to sing along with Revolution’s music, all Whitney Houston songs, how soothing.

One Response to “Sleigh Bells Review at Revolution 2/11”

Last paragraph made me choke. Lori writes a banging review. I never read show reviews because they usually pain my eyes but not Lori’s. Keep this one Music Obsessed!