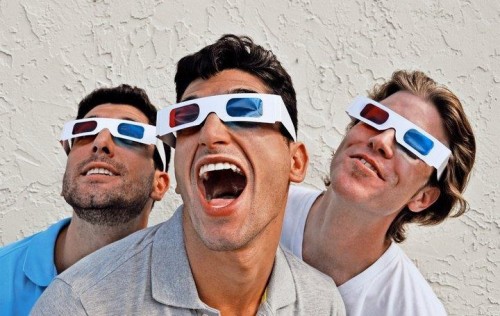 Mike Mineo gives vacationing tropical music a whole new meaning! They are calling it subtropic pop.  I dare you to not swing side to side while listening to it. Mike Mineo is a singer-songwriter and multi-instrumentalist born in Hollywood, Florida. In the summer of 2010 he was awarded “Best Male Vocalist” by Broward New Times. I don’t think I can disagree, he has a fantastically distinctive voice that you can not mistake. His playful vocal harmonies allow you to take a pause from your day to imagine yourself swimming in the ocean as the water wraps around you in a comforting and stress relieving manner. For us South Floridians, we can basically call this music home.

Other than your location, what motivated you to create “subtropic pop” music?

Mike: If you are in your early 20s to early 30s and grew up in South Florida chances are you were constantly hearing Sublime and loved them. And now the scene is overrun by tons of bands trying to emulate Sublime as well as mainstream bands, Pepper, Slightly Stupid ect. I wanted a highbred sound of the beaches I grew up on with a modern indie rock twist, more of a Calypso/Indie Rock instead of a Reggae/Radio Rock. From the finished product sonically and also my person upbringing I felt Subtropic Pop was a very fitting label.

What age did you first learn to play the guitar?

Mike: Well I started off at 12 on bass and watch my brother play while taking notes of chords and such. Then at 14 I joined a chorus/guitar class my freshman year of high school and stole one of the jr nylon-string guitars, brought it home, wrote my first song and the writing hasn’t stopped.

How do you go about your song writing? Where does the inspiration come from?

Mike: You might want to ask the song how it goes about me. There has never been an overall method or approach, it’s always been something I just allow myself to channel once it hits. I would say all inspiration for me comes from allowing myself to be sensitive enough to anything experience or occurrence within or without myself.

In late 2010, you went on tour to support your debut release of  Eccentricity, and played throughout U.S and Canada. Tell us some tour stories.

Mike: The tour was just Darren Scott and i he played drums and I was playing guitar and picking out the baselines. One night when we were outside of the Grand Canyon we were camped off on some bow hunk site in the middle of the woods. When we went to sleep the temperature dropped to about 40 degrees and we had to both share one sleeping bag. Then we started hearing what sounded like a rabid wolf going crazy and getting close to the tent. Pretty much the whole night consisted of running to the van and then going back to the tent and stuffing ourselves into the tiny sleeping bag.

People have claimed you are a modern day Frank Zappa. How do you feel about this comparison?

Mike: Honored, but I don’t feel an overly sarcastic approach in my music in the immediate future. I love Frank Zappa, but if someone came out to a show to see the next Frank Zappa I think they would feel mislead.

You recently formed the group MINEO. How has this change influenced your music?

Mike: Well the idea was for a more band oriented sound and not so much a “singer songwriter” type sound. However I am looking forward to working more in both styles and not just choosing one or the other.

What can we expect from you this upcoming year?

Mike: We are releasing an EP that was recorded in Nashville last year titled B Is The Key EP and next month I am going to start recording the 3rd full length album. It is going to be a full on singer/songwriter stripped down sincere production. I am looking for to it, it will be the most personal album for me yet.