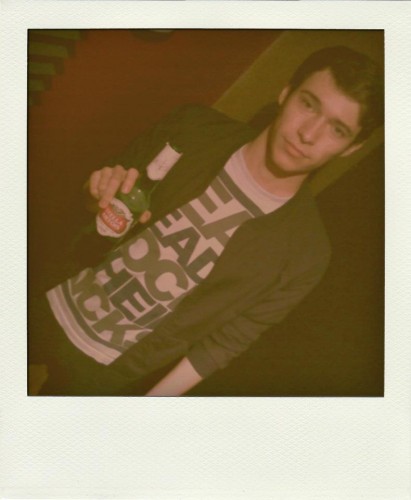 AbdeCaf is the recent project of Steve Vaynshtok, whom you may know from his other intstrumental band, Fight Like Animals. But as AbdeCaf he is the sole member, and if you ask me, the fact that he’s tackled such a genre by himself is something to appreciate. With dreamy synths and fluttering back beats, this solo project makes itself at home amongst M83 and The Weeknd fans, and with his February 11th opening gig for Com Truise, he’s bound to groove his way into chillwavers hearts.

So let’s start off with your name, where does AbdeCaf come from, and does it mean anything?

AbdeCaf doesn’t mean anything specific. It was just a cool sounding word that I came up with while pondering names. It was between that and Such Passion, but that sounded lame and pretentious. I’d like to make AbdeCaf mean something, at some point. The best names mean whatever the artist makes them mean. It’s also pronounced Ab-duh-Calf incase anyone’s curious.

There is an obvious distinction between this current project (AbdeCaf) and Fight Like Animals. What made you transition away from the electric guitar lathered sound of Fight Like Animals, to the more laid back and synth-pop vibe of AbdeCaf?

I’ve just been listening to more laidback stuff. I still jam out to Mogwai, and Explosions in the Sky and Ratatat, but I’ve been really digging stuff like Toro Y Moi, Washed Out, Flying Lotus, Balam Acab, Starslinger, Millionyoung, M83 and all those guys. I really fucking love Clams Casino. The Weeknd too. I wanna learn to sample like Clammy Clams does. I also wanted to show some diversity, I’m not just this cheesy, guitar slangin duck. I actually hate that first FLA EP with a passion because that’s not what FLA is going to be. The full length has alot of elements AbdeCaf has, but in a different way, with different songs. I have a sensitive side, I wanna showcase that emotion through this music. It’s my way of getting a lot of emotional baggage off my back, and translating it into something pleasing for the ears. Fight Like Animals is following suit, it’s going to be live drums, and me looping some lush and cleaner guitars over it. Very Explosions in the Sky meets Mogwai meets Me. I want my own sound.

A similar synth playing artist, Trevor Powers of Youth Lagoon, has described his music as merely a part of him, and not his whole self. It’s been understood that this project emerged after a break up, so I was wondering, do you feel the same? Or, do you feel AbdefCaf undividedly expresses you as a whole?

I think there’s no way to express yourself as a whole through one medium alone. I love film. I love women. I love music. I like video games. I love Ryan Gosling. I like to read. I like to hang out with my friends. I can’t compress all those things into my music, I can write songs about them, but I can’t ever encompass who I am fully through music. Fight Like Animals is my more outgoing and stage presence heavy persona. AbdeCaf is chill and laid back, Although I still try to put on a decent show. Between the two I do capture some of who I am, but not all of it. Only my emotions. I’d like to say my music fully encompasses my emotions and gives people a deeper look into who I am, but certainly not the whole of my being. There’s alot going on there. Ask my ex.

You’re opening for Com Truise  at Bardot this Satuday, as a one man band, how do you feel performing live?

I feel pretty good. It’s my second show and I’m only 3 months into this project, and I get to play at Bardot! With COM TRUISE! It’s surreal. I mean yeah, It’d be great to have a live band, but teaching people all the parts to my songs, teaching people to play perfect loops live, and having to deal with  laziness it’s a lot. I’ll save the drama for when I’m M83 status. He’s got a live band now, but didn’t always.

Being an instrumental project is a task in itself, none the less doing it by yourself. What made you veer into a lyric-less genre? Do you connect more to instrumental bands as a music fan?

There will be lyrics soon enough, but not to all the songs. Some songs need lyrics, some don’t. That’s just how it is. Instrumental music can convey 1,000x more emotion (in my opinion) than music with lyrics. I would give Explosions in the Sky more credit than any brilliant singer songwriter of our time, because that music will be beautiful 100 years from now, regardless of lyrical content, relate-ability, and sound. It’ll be a timeless sound, like Mozart, Bach, Handel, Beethoven. All those cats didn’t use vocals, they  captured the human condition through sound, and made it pleasant to listen to.

Besides the songs on Women I’ve Loved (I’m going to assume the names are of women you’ve loved) how do you title your songs?

I think I’m renaming Women I’ve Loved to Women. I don’t want people to get the wrong idea about some of those gals. Only one of them was romantic love. The rest are just really special to me. I title the songs that aren’t on that album by the experiences that inspired them, or with clever allusions to those experiences. “Mad Decent” is about playing pool with Diplo. I named it after his label. I really want him to sign me. He digs Balam Acab, I dig Balam Acab, we should party. I’m also putting out a song called “Brainfeeder,” so Flying Lotus… you know, check me out bro.