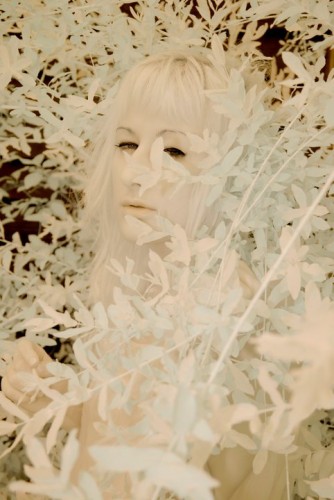 Zola Jesus is the stage name of the electronic goth darling, Nika Danilova, who has the industry buzzing. With her new album Conatus out, she’s on the road, soon to arrive to Miami’s open and eager arms. Equally enraptured by her dark and picturesque sound as the critics that commend her, we took it upon ourselves to dive into the mind of the compelling artist featured in SPIN’s best of 2011.

You once said, “I love the feeling when you hear a song that is so overwhelming and powerful it makes your veins hurt,” could you give us some examples of which songs have affected you in that way.

Nika: “Crying” by Roy Orbison. I can’t hear that song without feeling a giant weight on my body. It’s just pure.

You’ve been compared to the likes of Siouxsie Sioux, Kate Bush, Joy Divison, the list goes on. How do you feel about those comparisons?

Nika: Why would I want to be like anyone else? That’s no fun for me!

How do you think you truly found your sound after breaking off of Opera singing?

Nika: I don’t know, it’s still a struggle. I have an ambivalent relationship with my classically trained voice. I mostly hate it, though. It’s just about coming to terms with what my voice sounds like and learning to embrace it.

One of the things that sets you apart from other artists right now, is your unique use of imagery in music videos. Do you think of a visual aspect while writing your music?

Nika: Absolutely. Sometimes I have more of a vision than I can handle with just sound. It’s a fun challenge to try to translate an image to a sonic equivalent, but it can be tricky.

Has your writing process changed from your debut, The Spoils to your latest, Conatus?

Nika: With The Spoils, it just felt like pure experimentation. There was little skill, absolutely no planning, or second takes. Now, everything is planned and structured and I will toil endlessly over the tiniest of sounds to get everything just right. I’ve learned so much about producing and songwriting since then, so there’s no way I could make a record like The Spoils again. I just know too much now.

A lot of bands say that they have a totally different dynamic as a live band than in the studio. Would you say the same for yourself?

Nika: Yes. In the studio it’s just me, so I’m the whole band. On stage I have a bunch of guys playing the parts according to their own skill and style, so that live incarnation is much more fleshed out. However because I produce my music alone in a room, there are things that are added in the live show while other things are taken away. It’s very different.

Tell us how the project came about working with Anthony Gonzalez of M83.

Nika: Anthony contacted me about wanting to collaborate, which was amazing because I was just about to contact him about the same thing! It kind of felt like kismet. When I heard the song he wanted me to sing on I was blown away, it felt like something that was already in my blood.

In 2009, you did a project with the gloomy synth pop band, Former Ghosts. How was it working with Freddy Rupert, and how did it compare to making your own music?

Nika: Working with Former Ghosts was so much fun, because I could just be a singer. I didn’t have to do all the million other roles I do with Zola Jesus. Collaborating with other musicians is so important for me, because I never know how other people work unless I get right in their process, and I learn so much about the way I write and how I can improve.

Who would be your dream collaboration if you could record with any artist dead or alive?
Nika: Probably Aphex Twin, or Stockhausen.

If you weren’t Zola Jesus, what would you be doing right now?

Nika: I would be making music under a different name.

[...] an interview with South Florida Music Obsessed, Danilova exclaimed that when making her first album, The Spoils, she had undergone a completely [...]