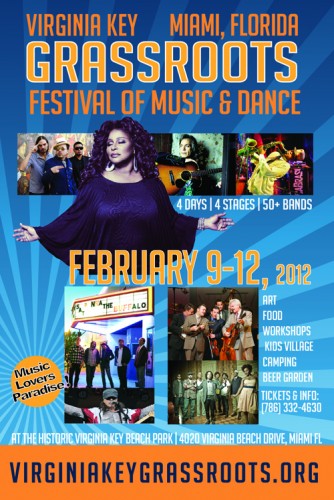 The four-day camping event will showcase some of the world’s most amazing and respected talents from over 50 performing groups whose genres include: Roots Rock, Reggae, Hip-Hop, Latin, Funk, Cajun, Bluegrass, African, Kompa, World Beat and Zydeco. The fest will include a Kids’ Village with interactive programming and a Healing Arts Area hosting daily movement workshops, massage and other bodywork modalities. Local and visiting artisans will showcase and offer for sale their handcrafted works in the festival’s Crafts Area. There will also be a Beer Garden, featuring Florida Beer Company craft-brewed beer. One of their four stages is a 1,000+ person dance tent complete with dance floor and dance workshops. In this tent we will feature Zydeco, Salsa, and a few electronic DJ sets from DJ Bill Kelly and others, of the Winter Music Conference, as well as many other acts from across the spectrum live music.

This is a community involvement driven event, which means they have plenty of volunteer opportunities for people to come and earn a ticket and work alongside their staff to make this festival a success. There is a volunteer sign up form on their website for anyone who is interested.