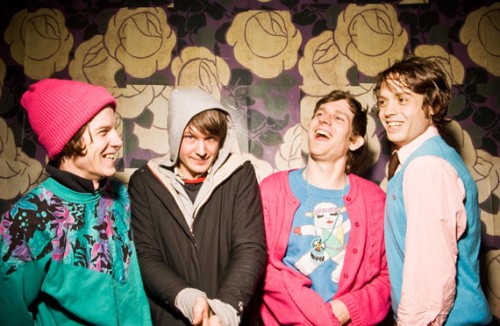 On Friday, Starfucker played their last show of the tour in the 305. Having been there just a week before, I was shocked to see what a change in atmosphere there was. The Portland band really reeled in the 90’s as Miamians excitedly pulled out their dusty old flannels in preparation for the show. I even saw one guy with a spectacular cheetah print shirt, and if the crowd acted as vivacious as their wardrobe was, it promised to be a lively and energetic concert. But before Starfucker went on, there was an opening act Alexico, that definitely deserves mentioning.

Wearing a red V Neck sweater and walking amongst the crowd, he didn’t stand out as someone from a band until he took to the, well, the carpet and picked up a guitar to tune. He announced that his name was Alexico, “Like, Alex…and Mexico,” he told me later. When he introduced himself, I thought to myself, and surely others inquired similarly, “where is the rest of the band?”. But before I knew it, he was playing guitar along with a pre recorded beat on his laptop. The concern for the lack of a backing band vanished instantly as he began to sing Spanish lyrics into the microphone, eyes closed, jerking and dancing to the music. Playing through one song, and moving to the next using his keyboard, man could the guy multitask. I mean, for a one man band, he sure brought a lot of sound.

The only way I could describe his music is as follows: if you took Miami Horror, LCD Soundsytem, The Pixies, and Beck, crammed them into a charming little Mexican dude, and sang every song in Spanish, you’d spawn Alexico. That may be a strange combination of bands, but if you broke it down you’d get the danceability of Miami Horror, the diversity of LCD Soundsytem, the spastic vocal range of The Pixies, and the lovable stage presence of Beck. After a couple of songs by himself, he invited Starfucker members, Shawn and Keil on to play some songs they had written together, and as they all danced around, Alexico really broke loose and slowly but surely the audience fell for him. Not only was his music completely danceable, it made a language barrier almost transparent, because in his voice you could hear what the song was about, even without knowing a word of Spanish. The range in his songs was wide, and along with his undeniable charm, he made for a great opening act and left an impression on the audience, and at least for me sparked a great interest in him and his music.

After Alexico’s set, Starfucker walked out shyly to their instruments. And man, were they the aesthetically pleasing band. And with a name like that, you can imagine the shouts outs I heard from some female fans in the crowd. (Please, keep it classy girls.) See, the great thing about this band is that with a first impression you get these nice skinny white boys, clad with button up flannels and floppy hair. They don’t look rugged, they don’t look mean, they seem completely innocuous and nice. The boys you’d take home to Mom, but the moment they turn on their instruments, they become so much more.

With each song they danced and swung and swayed and bounced, each member with their own unique style. Under the spell of those synths, it was almost impossible to not dance along with them. This non stop syncopation of movements could’ve looked awkward, but as long as the band were swaying, we’d keep at it, no matter how ridiculous our grooves got as the night went on.

The band played a long and full set, with limited interruptions. Oh, and did I mention there was a fog machine and laser lights? Not only did they play incredibly, but the visual aspect of the show was perfect. They really know how to put on a live show, and they did it with great pacing and a beautifully formatted set list. They had a great balance in the songs that they played, and left little time between songs as to ensure that our knees kept bopping and our hips kept rocking. But they didn’t ignore the audience either, in fact they handled everything thrown at them extremely well. They seemed a bit confused about the venue, having never been to Bardot or Miami before, the laid back living room vibe was something I don’t think they expected. But they moved around that carpet and danced like there weren’t fans directly two feet in front of them.

One thing about the proximity of band and audience in Bardot is that everyone becomes very comfortable with each other and it is a very intimate kind of setting, which can be a great thing to have, but isn’t common for such a dancey electro kind of gig. Starfucker, took this new setting in stride, and dealt with the ecstatic audience nicely, after giving a Happy Birthday to their “Tour Manager/Vibe Technician/Merch Hustler,” Chance, and suddenly fans shouted out that it too was their birthdays! Catching the crowds love for attention, Shawn finally said a “Happy Birthday Miami,” to which they received grand applauses.

Towards the end of the set, they launched into their hit cover of “Girls Just Wanna Have Fun,” to which the audience jumped and bounced around even more, finally getting to sing along. They announced they’d be playing one more song and went straight into it full force. Lead singer, Josh Hodges went head first into the crowd, pushing and stumbling about people that had been sitting on the couch (maybe you should stand next time, eh?) and shoved his way into the elated crowd. Microphone in hand, while the rest of the band made as much noise as possible, and began to knock synths down, throw floor toms and drum sticks, break whisky glasses and sufficiently made a mess of the place. It. Was. Awesome. A couple of security guards tried to stop the ruckus, but it was the last show, and  they were going to go out with a bang. Walking out of the foggy venue, I over heard someone saying, “That was starfucking AMAZING.” Critics can say what they want about their name, but I think Starfucker’s got something good going on.