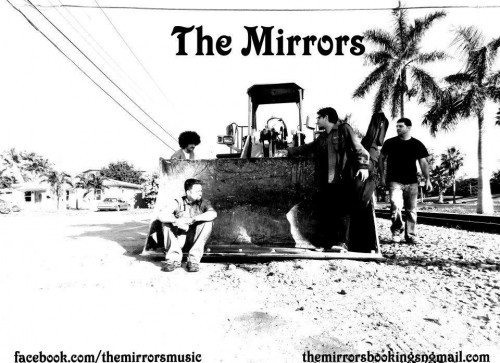 How did the band first form?

Anthony: Well we all ran into each other at a midnight showing of  Twilight…our bassist Albe got us all together through mutal friends and Craigslist.

Amidst the recent surplus of indie and chill wave bands, how did you find your rock and roll sound?

Anthony: When we create a new song nothing is ever premeditated we all just jam out and hope that something good comes out of it. I feel by doing that it gives us a type of rawness vintage feel to our sound. When I get to witness Nick our guitarist let loose and go crazy and lead the band in a jam session that turns into and song it truly is a beautiful experience.

Describe The Mirrors with 5 words?

Anthony: Vintage,  impulsive, energizing, attitude and according to some sassy.

Who would you say is a direct musical influence on the band, how did you discover them?

Anthony: We all have our own influences but the main music maker of The Mirrors is our guitarist Nick, and his influences very from guitarists like  Jack White to Jimmy Page and bands like the Stones to Cake.

What was your favorite show to play in 2011?

Anthony: The first thing that popped into my head was  Hialeah Fest at Churchill’s. We played with great acts like The Deadly Blanks, Lavola, Brand Name Punk, Radioboxer and Humbert. The energy and crowd were amazing and all the bands were showing how rock and roll in South Florida is rapidly growing.

What albums from 2011 did you have on repeat?

Anthony: I would have to say the Black Keys El Camino, The Red Hot Chili Peppers I’m With You, and Fitz and the Tantrums.

If you could open for any band in the world, old or new, who would it be?

Anthony: The Stones, Led Zeppelin or Chuck Berry,  but when I started to think about it I have to say I would love to open for any band in South Florida who gave us a shot and believed in us when no one did.  Like Space Between Words, Radioboxer, The Deadly Blank, Derevo and so many more they got us gigs when no one did so I would love to open for any of those guys anytime.

Anthony: We’re super excited about dropping our first album 7 Years Of Bad Luck” which is going to blow peoples minds, and we are also filming our first video.

Finish this sentence-Support local music because…

Anthony: All the cool kids do it.

3 Responses to “Local Spotlight: The Mirrors”

These guys are awesome, best band in Miami so far. I have the pleasure of being friends with Nick and that guy knows what he’s doing. Awesome musician, can’t wait to see them live again.

My five words to describe these guys would be Sassy, Mancandy, Boy-toy, Bro-ho and Snuggly, and they know it’s all true.

Craig’s comment makes me want to check out the band even more! Excellent interview.