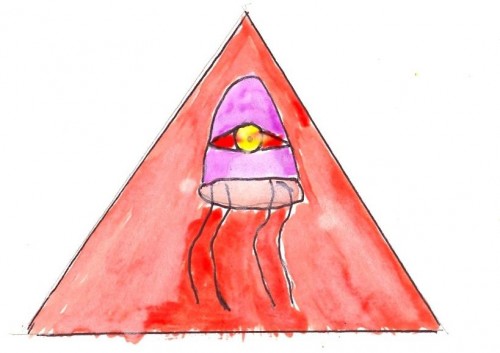 How did the band form?
The band formed after the collapse of our former band The Jagged. We had booked a couple of shows before the band fell apart so my brother, Eduardo, and I  used this as an opportunity to test out  a project we had in mind for a while, which was in fact, The Jellyfish Brothers.  We wanted to combine our love of movie soundtracks, horror comic books, as well as surf and doom music.  Then after a couple of months of playing as a two-piece I played a rough demo for our friend and neighbor, Janette Valentine, who also happens to be the bass player for a local band, Shroud Eater.   She was really into the music, we decided to jam, we all gelled and we’ve playing together ever since.
At what age did you begin to play music?
Eddy and I started playing music around 12 years of age.  We wanted to play guitar so we asked our parents to help us. They enrolled us in a weekend music school but we hated it because the only guitar they were selling was a Flying V Black Jackson.  So, during class everyone had the same guitar and we played Ode to Joy unplugged for months. That turned us off a bit.
How did you guys come up with the name The Jellyfish Brothers?
We started reading some environmental articles and all of them linked jellyfish overpopulation with heavy over polluting. That’s when we started becoming fascinated with these creatures.  We see them as Mother Nature’s way of cleansing itself and the oceans. Eddy began drawing a comic book about a group of jellyfish attacking power plants and oil rigs then we decided to make a soundtrack for it.
How do your personalities add to the band?
We all bond over cheesy horror movies,  vintage photography and cafe con leche.  Eddy is basically our promoter, puts shows together and has crazy marketing ideas.  Sometimes we let him get away with them!  He’s also into big primitive bottom heavy drum beats.  I’m too busy worrying about guitar sounds, like Egyptian and surf melodies to contribute to the band.  Janette contributes her love of doom metal and moody riffs.  We all see eye to eye creatively and really have lots of fun together.
What can we expect in 2012 from The Jellyfish Brothers?
Currently we are in the recording process and will be releasing new music soon!  We are also planning on making one of a kind cassettes to pass around and we are also working on incorporating more visuals into our live shows/tours to create more of a mood and inject our love of film into the live experience.
Who are you inspirations and why?
Ever since we can remember our grandfather used to take us to see classic movies that we didn’t  understand that well but we started to fall in love with the soundtracks of
Ennio Morricone , David Lynch  and Alfred Hitchcock.  Then we discovered rock and roll when we were allowed to play with our mom’s vinyl collection.  She had all the original Beatles and Rolling Stones releases and at that age it was great way to discover music! Overall we are all inspired by a variety of musicians, especially the classics, as well as cinema.
What was your first concert experience like, and how old were you?
I was about 15. I went to see Slash and the Snake Pit.  Wasn’t a very full show. It was mid boggling because we were used to seeing videos of Slash playing for thousands and thousands of people.  And at the time he was like a God.  And there he was, on a hot and sweaty day, around 6pm opening for Incubus or Stained.
Tell us about your video project Audio Junkie.
Audio junkie is a project which started with our film-buff friend Ron Gesualdo and it’s sort of becoming a video journal that explores our obsession with sound and performance.
There is a lot of great music in  Florida and this is a way for us to documented in our own unique way.  We are not interested in any specific genre , trend or style of music we simply document what attracts or annoys our ears.
For the last few months you’ve been hosting your own events in the Wynwood area. At what point did you decide to start showcasing other local bands?
Ever since we moved to Suite 206, about 3 years ago, we wanted to host shows there.  It’s a great space on the border of Wynwood.  After our neighbors, Shroud Eater, began using their practice space downstairs as a DIY venue we were inspired to set forth and create our own venue.  We’ve continued to do so and it’s been a great experience.
What is your favorite venue to play in South Florida?
Suite 206. We play comfortably there because it’s also our home.  Every time we play we try to create a party atmosphere and we encourage BYOB so it’s more of a house party vibe.  People seem to dig this more than seeing shows at bars.
Finish this sentence.  Support local music because…
otherwise all the good bands will eventually leave Miami…a couple already did!
Connect
Facebook