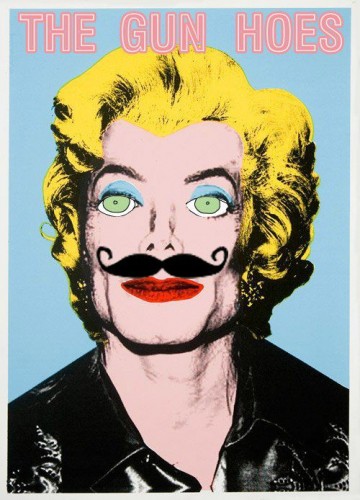 How did the band form?

Anthony: I asked Gabe to record drums for a solo project I had in mind.  The project never fleshed out, but Gabe took the drums, and wrote “Spooks and Apparitions.”  We started working on new material soon after that.

How long have you been together?

Anthony: We’ve been recording and playing music together on and off for a while, but The Gun Hoes were formed in January of 2011.  We released our music sometime in August.

Gabe: December 2010 was when I started helping Anthony out with his project and when I recorded “Spooks and Apparitions”.

How did the name “The Gun Hoes” come up?

Anthony:  Gabe came up with the name really early on and it stuck.  I didn’t want to dwell too long on different names, and it worked with our sound and work ethic.

Gabe: It came from the term “gung ho”.

Describe your music in 3 words

How do your personalities add to this band?

Anthony: That’s tough to answer, we kind of complement the other’s strengths somehow. We get a lot done in a short amount of time.  One personality that adds a lot to the band is that of #nightlurker who designs all of our graphics, flyers, album art, etc.

What upcoming projects can we expect in 2012?

Gabe: I hoping for at least two EPs this year. There’s a couple of old abandon tracks that I want to revisit. Maybe a few videos.

Anthony: I buy myself a fresh pack of smokes

Gabe: I like to listen to Macho Mans rap album.

Gabe: When I was really young I remember seeing Celia Cruz perform a few songs at the circus in Miami. I’ve actually never been to a big concert before… my first punk show was the Unseen, when I was 12 or 13. I remember being nervous, everybody looked mean.

Anthony: I got free tickets to Aerosmith, but I don’t really want to talk about it…

I’ve seen you guys play in venues such as Churchill’s, but what would be your dream venue?

Anthony: I love playing Churchill’s.  I don’t know what a dream venue would be, as long as we’re playing new places and sounding well.  I like being based in South Florida, always have.

Gabe: Somewhere outdoors in the mountains. I don’t have a specific venue.

What events in your life affect your lyrics?

Gabe: I don’t really care much for lyrics to be honest. I usually write them right before I record my vocals, since I have to. I don’t write anything personal, or at least I haven’t yet. I take my song titling somewhat more serious.

What is your favorite venue to play in South Florida?

One Response to “Local Spotlight: The Gun Hoes”

[...] tour this past August @ Churchill’s and it was awesome to see them again. They’ve been building up a lot of buzz and have gotten on some great shows. I am so happy for them! Just take a listen to the album! [...]