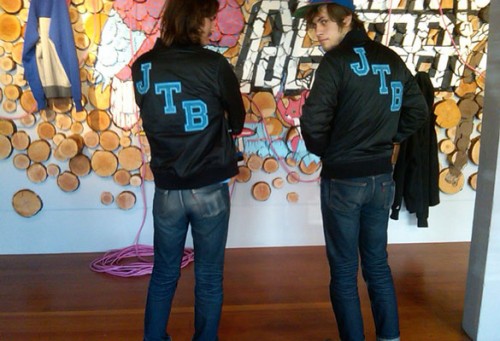 Everyone goes through that stage where they want to be rockstars in a band.  JEFF The Brotherhood got lucky in this scenario. A brother group from Nashville, Tennessee that started off right in their own living room, has now toured with bands such as The Raconteurs, and now The Kills! This psychedelic, garage grunge band is making their way down to Revolution this Saturday, January 28th. They seem to have a very wide array of fans that may even include your stoner uncle and punk rocker little sister.

Let me begin with the obvious question. The band is called ‘JEFF the Brotherhood’, but neither of you are named Jeff. Any reason behind this?

We picked our name out of a hat.

Now, as far as the brother relationship goes, would you say you’re both competitive or collaborative?

We are collaborative, but we wear each other out easily.

Back when you guys were kids, who started playing instruments first?

Where did you get the motivation to record so many albums, and tour so often at such a young age?

Its a fun thing to do, that’s the main motivation. Road trips are fun!

Who were your inspirations back then and who are they now?

Back then we were inspired to tour by all the punk bands we would play with that came thru Nashville. I don’t really remember their names. Now we’re influenced more by our friends.

In 2010, you worked with Jack White, tell us how that came about.

We first played at Third Man Records for Next Big Nashville and Jack/TMR wanted to record it and release it so that was how our Live LP came about. Then they asked us to do a 7” for their 45 series. It came out awesome, its got a Tiger B Smith cover on it!

Seeing as you are quite the prolific band, what can we expect to see from you in the near future?

In the future there’s more albums (the next one hopefully coming out this summer) and more touring, see ya then!