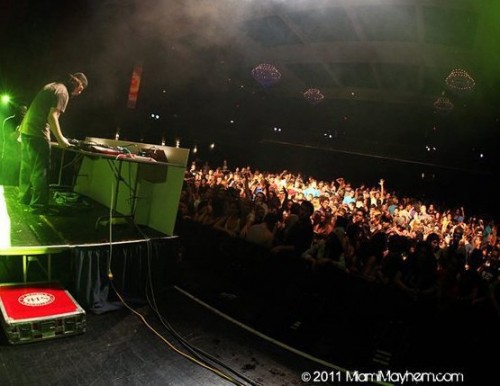 SFMO spent some quality time with local Miami DJ, and Basshead label owner, Juan Basshead, and his best man Harold Tanos as they fill us in on good and bad music, the beginning of the Basshead scene, and what he’s bringing to the table.

You’ve played along with a few of the Honeymoon series, how’s that been for you?

Simply for the fact that I got to play the Fillmore Jackie Gleason Theatre, ya know, super legit. DJs don’t usually play here ya know. Usually they have live bands play here, Mohammed Ali fought here back in the day, I’ve seen like Chris Rock perform here, so for me to perform here on this stage its legit you know. Like I get paid here, a check, and they take taxes away! Its usually like under the table but this is Live Nation, it’s a concert.

I think that lends to what a lot of people are calling an electronic rebirth, especially in Miami. What do you think about that? Do you think we’re living in the “Golden Era”?

I tell you what, I mean, I’ve lived through a cycle. I got into all of this in 1996, and I remember when I first got into it it was definitely blowing up, there was stuff to do all the time, seemed like every party was awesome. And I don’t know if people got old or what, but it kinda died out. In the late 90′s and early 2000′s the government really tried to crack down, all these Rave Laws, and I remember I used to play a lot of Drum & Bass and for a few years there it was really difficult to get a gig, because D&B isn’t good music unless you’re a D&B head. The average person cant wrap their minds around it, so it doesnt really make money, doesn’t sell at the bar, which is really what every venue cares about. In 2005ish, stroke of luck, I wasnt getting many gigs or anywhere to play so I ended up buying my own place. Rent my own place out and do my own shows, place called Laundry Bar right here on South Beach. And thats the first place to ever have dubstep or any of that stuff here in Miami. And it kinda grew into this.

Is that how you started to be a venue owner

Yeah, that was my stint as a venue owner, we were there for 4 years.

Now between being a DJ, venue owner, promoter, and your label, What’s your favorite?

My favorite, geez, well I’m definitely a music lover. I didn’t get into any of this thinking that I wanted to be any of that. So my favorite aspect still to this day is hearing my new favorite song for the first time, you know what I mean? So I guess DJ. I just started off going to shows because I liked going to shows, and to hang out with my friends. Then I went away to college in L.A., and I thought the rave scene here in Miami was like, how can it get any better? But when I went to L.A., I realized that there was a lot more out there. Here in Miami we’re very segregated when it comes to music. How can I say this, Miami’s unique, its a special place. Stuff that works in Miami doesn’t work other places. And that’s my ramble, I have no clue what we were talking about.

SFMO- Now if it wsnt for DJing what would you have done?

JB- Yeah with his mom, haha. Well I used to do real estate. That’s how I ran across the club that I bought. I wasn’t doing it because I wanted to, I had to do something. So I worked hard every day. But when I had the chance to dive and do my own thing. I mean, I’m lucky I did okay. And when I had the opportunity to “follow my dream” whatever, make things happen for me, I did, I made it happen.

Can you remember the first time you heard bass?

We’re from Miami so, I’ve been hearing bass on the radio since before I knew what it was. I used to sit around and tape Power 96, and it was dance music from Europe but I had no idea. A lot of the times I only heard those songs once, the only time I could catch it on my tapes and then I would cut them up and tape them back together with actual scotch tape and make my own mix-tapes. And then I super got into music ya’know. When I went away to boarding school I was exposed to kids from different places and the kid next door to me, and really late at night I would get woken up with this big bass music coming through the wall. It didn’t piss me off, I like music, I’m a deep sleeper. But one day I heard music that I loved, but I heard it in a different way. At that time I was loving Snoop, Dr Dre, Ice Cube, all that is sampled from Parliament, George Clinton. He was playing that O.G. George Clinton stuff. That’s how I fell in love with George Clinton who I’ve seen 31 times and counting. George Clinton, if you’re getting this interview let’s do something. But that moment in my life that taught me about sampling really made me dive and dig into all the album sleeves and read all the liner notes- Wow, I haven’t thought about that in a long time.

So how does that translate into your approach, Do you plan a set ahead or-

No. Never. How do I plan a set? I don’t plan a set. The type of DJ I am, it’s really up front music so a lot of my set is definitely me playing songs by my hookups, my exclusives. That’s what really matters in this underground bass culture. Its having the hottest tunes before anyone else has them. And what I like to do with that is mix in all the tunes I grew up with. That’s how it stays fun for me.

What is your view, what makes good/bad music?

JB- That’s so good because most people always ask me what kind of music do I play and to me there’s no genres, just good or bad. I think I play what is in my opinion good music. So what makes good music…

JB- haha yeah, common thread is bass. And I love a good groove. Anything I can lock into and dance to.

You mentioned genres, what do you think about all the people that are critiquing, especially the electronic genres

You cant really critique music because it’s an art. Who’s to say whats right and wrong. It’s opinion. You can’t do that any more than you can tell someone that they’re drawing isn’t a good drawing, like, who are you? Mmmm I used to be one of those people back in the day. and other people used to tell me like, if you know so much why don’t you do it. And I did it. I feel that way to people critiquing music. You think you know better, show me.

Is that what pushed you into performing?

It did, it did. When I did my first show my idea was just to do that one show and hopefully kick all the other producers in the ass. I mean, I used to go to the shows that I loved, went away to school, and when I came back it was basically the same stuff. I wanted more. And if you want it done right you gotta do it yourself.

So those who can’t do, critique?

Well anyone can make music.

Hey man, back in the day people used to bang sticks together.