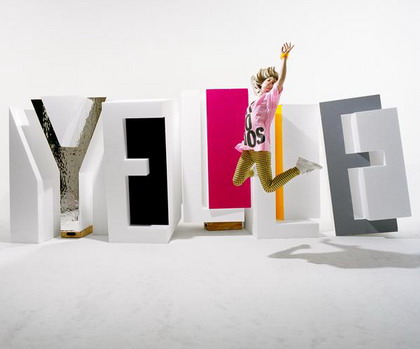 We spoke with front woman Julie Budet from Yelle about their new album, and what she finds odd about America.

How did the three of you come to join together and form Yelle?

Julie: GrandMarnier was doing some beats on his computer and guested me to sing on it. At this moment Yelle was born! Then Tepr joined us to finish the album and play live with us.

Did you all have different musical taste that you contributed? Or did you already happen to have the same taste in sound, that is Yelle?

Is Yelle a charachter, or persona. or are you always outspoken and high energy like that?

Julie: It’s an extension of myself. I am kind of shy in real life but I could be the opposite with close friends. The crowd becomes my close friends when I perform!

What do you think when people liken you to others in your genre like CSS or New Young Pony Club?

Julie: I understand, our sounds are quite in the same recreation center! Our first show was with New Young Pony Club though, 6 years ago!

From ‘Pop Up’ to ‘Safari Disco Club’ how has the band grown?

Julie: 3 years of touring around the world… It’s quite something. So we naturally grew up, like everyone, with that amount of stories and feelings, and energy spent and received.

How did you come across the name Safari Disco Club?

Julie: GrandMarnier had these three words in mind for a while, I don’t know why! And they inspired us a lot for a song, and then for the title of the album, cause it’s so rich regarding images, and full of sense regarding the whole songs.

Why the African feel for this album?

Julie: Not really an african feel. It’s really something which comes from the drums, the beats. For example the Mon Pays beat is a songo beat, for the caribeans. Drums took an important part in our live shows, and GrandMarnier, the main composer, is basically a drummer…

It was in production for awhile, was it difficult to write the album?

Julie: Not really for a while actually! We only took one year to make it. The thing is we have been touring for 3 years with Pop Up… so yes, 4 years can seem long for people but it’s not 4 years of writing!

What’s your most personal song?

Julie: Mon Pays is very deep. Was writen in a tough period, and it’s about the envy to move, to change your life, your country, everything, you know, when you want a “reset”.

Do you guys dance tecktonik like in ‘A Cause De Garcons’?

Julie: Ahah not really! A few basic moves that video really lent a lot to the dance scene

Did you intend to try and expose these parisian moves to the world?

Julie: We tried nothing! Basically we just guested 3 dancers to do an alternative video for the Tepr remix of A cause des garcons, and it was the very beginning of this movement. It became huge, so the video too! It just happened like that!

Whats the weirdest thing to you about America?

Julie: The food, the AC, and water in the toilets: too much!

How do you feel about being fasion icon?

Julie: Oh! I don’t know if i am fashion icon (blushing)! But i love fashion and i love collaborate with designers, it’s totally part of our creative process. By the way, go watch our new music ‘Comme un enfant’ !