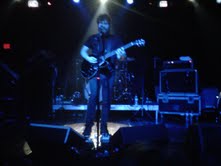 Furry beards, flannel and head-bopping; that is basically what a Manchester Orchestra concert consists of. This show commenced with Atlanta’s Dear Hunter. They led off the show with some rather fantastic tunes. The crowd was undeserving of such a splendid band. People became too fixated on the main band, and didn’t realize what great talent is opening the show for them. This was their chance to uncover fresh, raw music, and they failed.

This barefooted guitarist seemed tremendously absorbed in his music as he head banged his way into my heart. I cannot stress enough the facial expressions of all these members. Their faces squawked and gawked. The lead singer shouted the lyrics to these beautiful songs as his beard leaked with sweat and passion. Behind him, the light was hitting the drummer in an almost godly manner, as the yellow glowed from the edges of his body. The band played a set-list thick with new tunes, but also mixing in older favorites, while having some rad solos and interesting transitions as well.

Next on the list was White Denim. I wasn’t familiar with this band either, until someone told me they were the ones currently tuning their instruments on the stage. They quickly and unexpectedly transitioned form tuning to actually playing- I’m not sure that was a good decision on their part.

I was extremely unimpressed with the crowd’s attitude towards the bands in general. It was tremendously impolite for everyone to simply be bopping their heads gently, acknowledging the music, while we band members were working hard and sweating from the most bizarre places. White Denim’s lead singer was swaying and boogying out trying to get the crowd to have a good time. The member even started salsa dancing while singing at some point! The crowd did not budge. This group, of robotic and impulsive bobble-heads, simply stood there. Doing what they do best. Bopping. Speaking of rude, we had some nincompoops shouting for Manchester while White Denim was playing. Someone even called out for them to begin playing already as White Denim prepared onstage. I felt terrible pity for the band’s drummer, as he gave him a sort of inquiring and disappointed face.

Maybe there should be some sort of tutorial on how one should act at these sorts of concerts to avoid annoying those around you, as well as disrespecting the band. People paid money to see a band. They surely do not want to have someone ruin it for them so quickly. This band had a soul splitting bass that ran through your body pounding against every organ inside you. If you’ve ever been to a concert, I know you know what I’m talking about!

The show was held at Revolution Live in Ft. Lauderdale, on a Monday night. For a Monday night, my expectations for the amount of people attending were quite low. I stood corrected. I had never been there before but heard only good things about it, and now I understand why. It was such a comfortable venue, and the people, as well as bands, were giving off the sweetest and mellowest vibes. Until Manchester Orchestra started playing, that is. Everyone basically went wild. Wild being an understatement as to what was happening. Some chick started going nuts and ferocious as she kicked and slapped and thrashed her way to the front of the crowd. This barbarian was right behind me for a good 30 minutes of the show and I can assure you I have a good dozen bruises as battle scars to prove it. “You are five inches away from hitting me in a place where I do not want to be hit. Please refrain from continuing this freak show,” were the exact words of a member in the audience referring to the hooligan behind me.

[...] beers and moshing. For a very in-depth review of the show, please head over to our friends at Music Obsessed. Our experience didn’t differ much from theirs. Out of Alpharetta, Georgia, this [...]

Well written review. I bought tickets to this concert without even knowing the bands at all and they were pretty amazing. That was raw talent. I completely agree with you about the audience being lifeless and all. What a shame, The Dear Hunter and White Denim performed amazingly well.