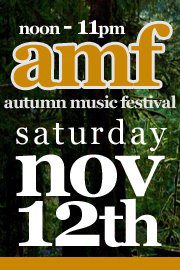 This Saturday Nov 12th, Autumn Music Festival will be at the new 110 acre Broward Regional Park & Stadium, and so will you. After speaking with founder, Mark Ivan, the adrenaline has started to filter in. I’ve already got that sick-in-the-stomach feeling that happens right before something audaciously amazing happens, and I want to wish it upon all of you! So grab all the glow-in-the-dark items you can find and clear your Saturday, because this is something you’ll regret for 364 days…until next year’s

Mark, thank you so much for the time, but more importantly for this festival! The buzz around it is wonderful, I hope you get to get a chance to step back and bask in the glory for a little bit

Mark Ivan- haha me too, this weekend for sure

For our readers who aren’t too familiar, what would you say is Autumn Music Festival in your own words?

Mark- I think AMF is a combination of all of South Florida getting together, putting all their resources together into a yearly event, and, to celebrate our electronica scene! The reason I say this is because mostly everyone involved in electronic is some sort of way a part in this event.

Can you tell us, what is the story behind AMF, how was it created?

Mark- Well it was created in 2008, or 2007? I forget offhand which year haha. Pretty much just a brainstorm of me and my friend Chris Martin who decided that, well, we were looking across the street at an area that we wanted to do a festival at, just a local or free event. Something to celebrate electronica! Get everyone involved! And basically just coordinate an annual festival where at the right time of year we all just gather our resources and have fun and celebrate.

That sounds great! Now, tell us a bit about how you grew up, what made you embrace electronic music?

Mark- Well basically I’m from NJ and what ended up happening was high school. I was a little bit sheltered before, in high school in the early 90’s I was introduced to Manhattan where I went to like, raves and things like that. And then after I graduated high school, early college, I started going to the city a lot more and got really involved in the city. Playing at those clubs and so on and so forth, it just grew from then on.  In ’97 I moved here to FL, and pretty much had the beginning of Full-On Productions Company, and it just went from there, I mean, we have thousands of events under our belt, booking from around the world, all the top guys at one point or another have played one of our shows.

Of course we have to talk about last year, with the riots, and being shut down…Was it a lot harder to make AMF’11 or what was the reception?

Mark- You know, what the problem was, unfortunately it was that I wasn’t in the forefront of the liaison between the police and the security of the festival, my partners… that was something they were taking care of. I wasn’t in contact with them, so when it started to happen and when I was trying to dissipate it no one was really listening to me because they weren’t really aware that this was actually my event! So, every year before I had done it solo and had some sort of partnerships, but this year, its totally back under my control, 100%. So I oversaw everything from hiring the police to, everything! So everyone knows who I am and I have the say in, how the lines going to be, or how we’re set up. Keep in mind this year we’re in a 30,000 capacity stadium where these issues are not even going to arise at all, Last year it wasn’t so much a capacity issue, it was more of a line issue where , to be honest, it wasn’t really thought that the line would be as crazy as it was. But obviously it got that crazy! So the reason was that they couldn’t control the line. It had nothing to do with capacity inside, kay. now the “rioting”, what you may call rioting, which no one actually rioted, they were dancing. Even quoted from the sergeant from Miami police dept said they weren’t rioting, they were dancing. Rioting would have been a much, much different scenario. You can’t compare, it was dancing. And how that occurred is the police decided, ‘Hey we’re gonna shut it down and let everyone out all at once’ so like, where were they gonna go? They were upset it got shut down and when they tried to dissipate, they’re not gonna leave. They’re just gonna stay dancing around!

Maybe the police should have put an after party into effect!

Mark- Yeah haha, well my idea was like; okay well let’s just let ‘em in! But uh, there are certain things I really can’t comment on but I will say, they could have been handled differently. I would have just opened the gates and let everyone in! Instead people got sweaty and angry. So this years a totally different animal, and I mean as soon as you get in the park…I mean, I WISH there was gonna be 30,000 people but ya’know.

Yes, so what can attendees expect this year? When they walk in the gate

Now on the day of the festival will you be able to see some sets, which ones will you be sure to be at?

Mark- Well I’ll pretty much stay at the main stage, but if something catches my attention I’ll wander over there. And I mean, in like 2008 there was so many people, like Mardi-Gras, you couldn’t move anywhere! This year is definitely a combination of everything I’ve learned over the years.

What acts were you excited to book for the festival that we should be excited for?

Mark- I booked them all! So if I booked them, I was excited about them. I mean, I tend to be ahead of the curve and book acts that SHOULD be headlining festivals, so they headline my festival. A lot of new talent, and usually after it’s been showcased then it’s sought after, for instance Rednek, he’s going to be a superstar if he’s not already. I got him, and I told him, hey we’re gonna have you at my festival. For instance, TV Rock, everything from Swedish house mafia to Mark Night to Dirty South, that’s whose music they play! That’s the guy that THEY remix so TV Rock is high on my list since all the music that you hear is his! And now to see the artist come and actually play his tracks and even unreleased things, it’s all very exciting! And of course we have our staple, Bad Boy Bill, not only is he talented and plays great music, but to me he’s definitely a festival DJ, I see that everyone from high school, to older generations knows who he is! He’s just got that branding in America. Even the artists I booked thinking they would have a branding have nowhere near what Bad Boy Bill has.

Well I speak for myself, South Florida Music Obsessed and hopefully the other 30,000 other people that will come to Autumn Music Festival to say thank you for this chat, and even more importantly putting this all together! And we’ll see you on Saturday!

One Response to “Interview: Mark Ivan of Autumn Music Festival”

Leave a Reply to Dacey