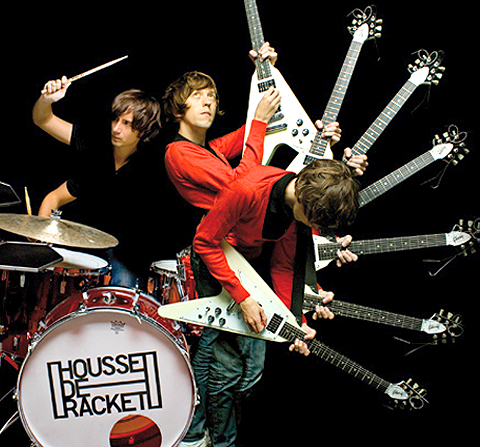 A brief interchange with Parisian Victor Le Masne, half of the duo Housse De Racket, and I couldn’t restrain myself from adopting a French accent or humming their songs. They’re opening for Yelle on her entire tour, meaning they’ll be here in Miami on December 2nd at The Fillmore. A dreamy post-punk band laced with an indie-electro flair, between swaying with their synths and jumping on your tiptoes to a punchy drum beat you’ll be hooked. Their music videos seem to play out exactly what imaginations could be filled with when encountered with this frank new sound. So Google, Facebook YouTube them! Anything! Just hurry and get it in your ears because you don’t know what you’re missing! I couldn’t wait to talk with him and see what went on to accomplish this bilingual, transcontinental journey.

So where are you right now?

Victor: I am in Paris and umm, in front of the place that we are getting ready for the tour at. So i am just on the street

How is the weather today over there?

Victor: It’s like typical Parisian fall weather, you know like a uh not cold but quite cool, quite cool.

I hope you’re looking forward to coming down to Florida, it’s pretty warm down here.

Victor:  And what is it, how is the weather, like very sunny? And hot weather?

Victor:  We have to take like, our swimming suits?

Victor: Ooh! But its going to be complicated because we have to go to New York as well, in the same week or something. It’s going to be hard to make the package you know.

You’re going to have to pack your speedo and your leather jacket.

Victor: I would suppose haha

So how did you get in contact with Yelle for this tour?

Victor:  Ahh yes, we are really good friends and we played with Yelle 2 times, actually, in Paris like maybe 3 years ago when we were really really a beginner band.  The other guys in Yelle and Yelle, we are very scruffy together with our band and they are very kind and gentile. So then we got the news they offer us to play step up act for the U.S. tour. So yeah, I love her! All that from Britain influence, the nicest people in the world.

Victor: I haven’t tried yet…we will have to see.

So with your band, how did you two meet?

Victor: With Pierre, we were in the music school when we were teenagers and was beginning of long, long long friendship. We’ve been friends since! We’ve had many bands before, together and other guys. Then we decided to make a two piece band, Pierre and I. And that is Housse De Racket!

So how did you get the name Housse De Racket?

Well, we’re not complaining! It’s even better with the story.

How do you feel about the remixes of your own songs?

Victor: I think its very good. there is a really growing scene, and we’ve got alot of now good friends in the music business. So we are always ready to share our music. and its always cool to listen to what can someone can make. For me my song is always that way, those chords, that verse and its always cool to hear another guy making totally different stuff from our own songs. It’s very constructive.

With your two albums, between ‘Forty-Love’ and ‘Alesia’ what do you feel the difference is? Is there a new concept, a new feel to it?

Victor: There is a lot of difference. The first one was a very big, how can I say, a patchwork. The music was all of our influences from, Queen to Prince, etc. We take like 25 years to make it haha we put all we’ve got at that time to make the first record. and the second one we made it only in one year, so maybe its more focused and precise.  We hired a producer to make it with us, it was quite different. I think its more of a grown up record, more mature because the first one was very teenage in a way, but I love it! It was very good at that time, when I listen to the first one I love it, but I’m like ‘ahhh its so teenage! I don’t know!’  You can really feel the youngness of the band, for me. I’m the least objective guy in the world about the record.

I loved the album artwork on ‘Alesia,’ it reminded me of kind of a star wars sci-fi but with a greek goddess…did i get it right?

Victor:  Yea!  For the second record we decided to invent in a way, our own mythology about the name Alesia, which in French is a battle. In which the Romans and the Gaelics had a huge fight and the Gaelics, who are the ancestors of the French, just lose that battle. and it was umm, it was an amazing thing for Europe, and for France at that time. And Alesia is a beautiful name and so we just inverted our own mythology about that name. We worked with Sanghon Kim, who also made the artwork for the album. and we spoke with him, had a great discussion, and the next day he came with that! And we were like, “Ahhh we love it!” it is very sci-fi and a bit geek and star wars, and in a way I think we are a bit like that so yeah. The same guy made the last video we made, Chateau, he made the artwork and the video.

I was just going to say, that name sounded familiar. So how was his creative process from just artwork and into directing? Was he heavily involved in the whole album

Victor: I think its create the music and the live shows….because we don’t know anything else! We were just born as musicians so the things we do the best is write songs, good songs. We try. We hope. All the live parts are very important for us, when we work on the songs we always think to the live shows and really excited about how it will sound live! And being creative with our music is, i think, the best part about being in a rock band

Do you guys prefer smaller venues or bigger shows?

Victor: We’re more used to, well in France now its like a quite big show it’s okay…but in the USA its going to be with Yelle and i think I prefer the very very small ones, I think theres more humanity and you can really feel the people when there is like 5,000 10,000 20,000 its great but you don’t feel anything as strong as when there’s say, 200.

With your songs you have some that are sung in French and some that are in English…what makes you decide to sing in which language?

Victor:  For the first record it was all in French, and it was great. For the second we decided to add some new stuff! And be surprising with ourselves! So we decided to try in English…but as you can hear I’m not the best English accent or English guy ever , the English is very new. So every new thing is an exciting thing and it was just totally new so it was good! We didn’t avoid our French part, because we are still French. Look at Yelle, she sings in French and shes doing well in the US. there is no barrier, you can speak in French or Italian it’s good to add more university. If we could speak in Japanese I think we’d do it!

Well don’t worry about your English, it is much much better than my non-existant french

Victor: I’m not sure about that, lets meet and you speak French and I will judge, see for me to write English is different. I can sit and be focused but when you speak English, for a French guy you have to be very focused, or at least i try.

This going to be your first show in Miami?

You know you’re going to be here for Art Basel week in Miami Beach.

Victor: Yeah! We come one day before our show, on the 1st, and we might be able to make a show that night. a DJ maybe

We’ll see you in Miami in a few days.

Victor:  thank you so much! and we will see you soon!

My brother recommended I would possibly like this web site. He used to be totally right. This publish actually made my day. You cann’t imagine just how so much time I had spent for this info! Thanks!

Wow, splendid site structure! The way lengthy have you been writing a blog pertaining to? you’ve made running a blog glance effortless. The seem of your respective web site is wonderful, when efficiently as the written content!

The very best firefall actually, vogue nice eye-catching! How much more can one assert.Good quality, well-built, I LOVE A firefall!!!!!