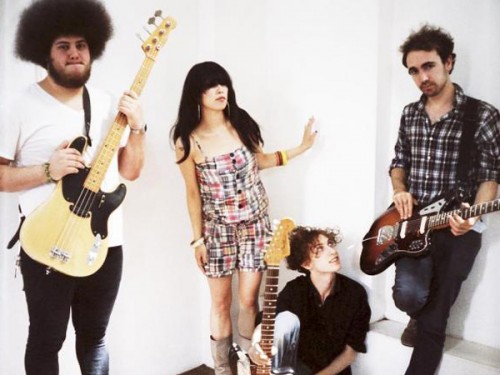 Tonight, Yuck will be performing at Bardot, and we couldn’t be more excited to have them in our hometown.  Max Bloom (guitar, vocals), chatted with us about  life on tour,  The Weezer Cruise, and what to expect at tonight’s show.

What are other band names were you considering before finalizing the name Yuck?

I’m pretty sure that Yuck was the first one we landed on. I vaguely remember coming up with some funny alternatives, but I know I couldn’t really think of any other names. I don’t think we put hours and hours of thought into our band name!

We read somewhere that you all met in an Israeli desert, tell us more about that.

Daniel met Jonny when he was visiting some of our friends on a kibbutz in Israel. I think he was wearing some sort of band tee shirt at the time and they got talking, and then much later we sent him an email asking if he wanted to come over to London to play in a band with us. We didn’t think he actually would, because he had just started college in New Jersey. But then he dropped out, and quickly came over to London!

This spring we saw you perform at Mellow Johnny’s bike shop during SXSW, would you consider that the strangest venue you’ve played?

It wasn’t really strange. Obviously we had never played in a bike shop before, but then again, it had all the equipment that regular venues have, so it wasn’t that different to playing a regular gig. I think the Weezer Cruise will be the strangest venue we will ever play.

Speaking of the Weezer cruise,  you’ll be back in South Florida this January. Did River Cuomo call you personally to invite you on the bill?

I wish he did, but I doubt he knows who we are. The cruise is going to be the holiday of a lifetime… we’ve been touring pretty hard this year, so I think we all deserve a relaxing holiday together.

What are you looking forward to most about the cruise?

Your fall tour schedule is jam packed without many days off, what do you do to stay sane?

Unfortunately, the days when I can say I’m sane are long gone. I’ve gone completely insane. There’s no turning back now.

Musical Equipment – so you can record or make music when you’re in the van or at the venue or something.

iPod – with lots of new music to listen to throughout the tour.

Books – maybe books relating to where you’re traveling, music books are good on tour too.

Swim Shorts – because you never know when you’ll need them, and when the time comes and you can use them you’ll be so happy you brought them with!

Camera/Flip – anything to document your time away so you can remember the experience years later.

Your self-titled debut album was released earlier this year, describe the process of making that record.

Daniel and I spent a year roughly just spending time recording and writing songs in my bedroom. When it came down to recording we had maybe 30 songs to choose from. Recording the album was a huge learning curve for us, we had never recorded anything apart from ourselves. For the most part it was trial and error. We didn’t record the album too differently to how we did the demos, so we carried on recording in my bedroom for the most part. We did the drums in a studio, and then the vocals were done at Daniel’s place. Everything apart from the drums were recorded on my 8 track, and then I mixed/edited it on GarageBand.

What music are you currently listening to?

I’ve been listening mainly to Spiderland by Slint, Ambient 1 (music for airports) by Brian Eno, and Trans-Europe Express by Kraftwerk.

What can we expect from your show at Bardot this Saturday?

It will probably be quite loud, but don’t bring ear plugs.

Leave a Reply to tia