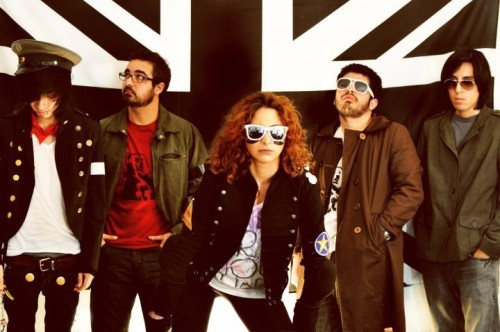 What’s the origin of your band  name?

My (Jota Dazza) grandfather was a doctor, but he had two passions growing up boxing and radio (mostly political commentary and that kind of stuff). We thought combining both things had a nice ring to it. Plus, we think the energy of the band on stage fits the name quite nicely. The only con about it is that most people think is because we are huge fans of Radiohead, so they expect us to break into “Paranoid Android” or something.

Vane and I started a duo after we saw a girl and a guy singing at taco restaurant. We told ourselves if they can do it, we can do it too (we were very poor and we loved tacos (still do). We started as a duo doing covers, and soon started writing our own material. Soon we realized we needed the full band to develop the ideas the way we wanted. We met Gian and Santos in college, and then Esteban answered an ad in one of those online classifieds sections in the Miami New Times. At first, we didn’t know exactly what we were doing, but we received great feedback on our shows. Vane was a force of nature on stage. Thanks to people like Hialeah legend Ferny Coipel (Humbert, The Shack North) and other people and bands we have forged our creativity into what you see today.

Bi-Polar Power Pop or Bi-Polar Pop. That seems to do the trick, and gives an accurate mental picture of the band.

Your sophomore album Magic City Ruse was released this spring. How has your music evolved since your debut Radio Drama back in 2008?

The songs on Magic City are simpler in structure, and more energetic. They feel a bit bigger and are more fun to play live. When we recorded Radio Drama we wanted to try everything we knew. I think for MCR we had a better idea of what we wanted. However, we still plan to evolve for the next album, and  take some elements from both albums. Try to keep expanding not only in sound, but in message and image. It’s hard to tell exactly what direction the band is taking at the moment. A band that does not look for re-invention is not fun, an artist should not be compliant.

Most of the times I (Jota) write the song and I show it to Vane; she usually improves the melodies and gives the song a personality. Some songs she writes, and then I work in completing some of the lyrics or music arrangements. When we have a good idea of the song’s structure we show it to the guys, and the great battle of what instrument goes where begins. A lot of time the soul of a song is really in an instrument. For example, “Placebo Effect” was written one year before we ever played it because neither Vane nor I were happy with it. We loved the song but we were not happy about it, a huge fucking piece was missing and we could not think  what it was. Once we were playing with it at practice and Santos (bass/guitar) started doing this fanatic bass line simple, fast and beautiful and the song suddenly fell into place. Creating music is like finding a door to some awesome place and then figuring out where the hell is the key.

What can people expect from a live show visually and musically?

Musically, songs they can sing along and take home. We try to make our music easy to love, and I think this is more clear at our shows. Vane is a wonderful medium for the songs, she feels them and it’s not afraid of showing her emotions in front of an audience. This puts the songs in the context they are supposed to be heard. She has an amazing voice, but she is never more real than on stage and people pick up on that. As far as our show visually we do try to go the extra mile. We work hard and are obsessed with providing people an experience. We have our own lights (we made it them ourselves) with blinding yellow lights, lasers, strobes and other types. We love to play around with confetti and fake blood (for the dismay of many venues) and balloons. However,  all of these are just props, the real treat is seeing our band so jacked up on energy that you literally can’t predict what would happen next. Anyone that has seen us enough times lives has been injured by a show one time or another. The energy is contagious so when you get the 100 plus people on that state shows really become something. People release their energy and they come out of a show feeling a little bit better about themselves, which is really what it is all about.

There is not a “favorite” it is really the crowd that makes or breaks the venue.  There are places that have a special kind of energy like Churchill’s in which you feel like it is really up to you, no niceties or dazzle but the people will respect you if you give them a hell of a show. Other venues like The Stage have a great sound system, and have been more than generous with us. We have had great shows  at full at capacity in those venues, and we loved every minute of it.

It’s your home.  We are not so different from each other and you might find something you love. (Plus most of the times is like $5 or free, come on!)

Oct 23: Hialeah Fest at Churchill’s pub
Oct 29: with Space Between Words at Bardot
Nov 11: Star Wars Party at The Annex in Hialeah.

One Response to “Local Spotlight: Radioboxer”

Best band in Miami!
I want to read what the other band members have to say as well !!