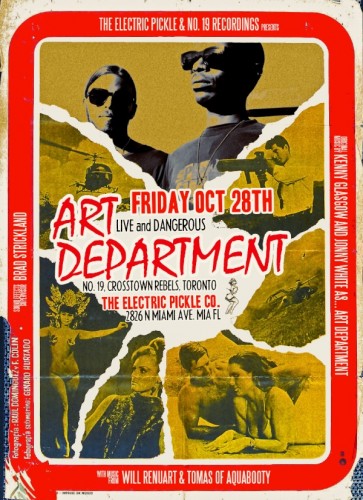 Art Department at The Electric Pickle

Art Department is the brainchild of Canadian techno/house Legend Kenny Glasgow and Canada’s fastest rising star and No.19 label owner – Jonny White. As individuals both Kenny and Jonny have released countless critically acclaimed records and are regarded internationally as two of the most forward thinking, relevant underground producers out of North America. Kenny’s credentials date back to the late 80’s and include productions on Narcotic, Jinxx, his own Method 11/11 label and Turbo. Whilst White’s revered No.19 Music label along side a blindingly fast – growing discography have seen him rapidly rise to the forefront of the international scene.

The pair, despite being close friends and stalwarts in the Toronto electronic music scene for years, had not joined forces in the studio until only as recently as 2009, when Damian Lazarus called on them to remix Riz MC for his prestigious Crosstown Rebels Label. The result was an entirely new sound that drew cues from the best of both artists. It was a futuristic and raw, synth-driven, underground masterpiece, the start of a new idea and the birth of Art Department…

2. Tweet us stating why you should win Art Department tickets.

Art Department – The Drawing Board