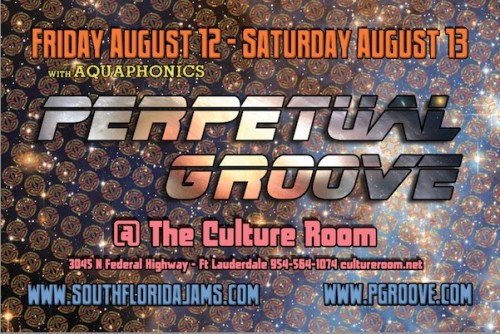 FOR TWO NIGHTS AT THE CULTURE ROOM

Perpetual Groove has had quite a run over the last two years. The genre-spanning band released two studio projects including Heal, a full-length record and Honey Cuts, an EP. Add to that a slew of sold out shows, major festival appearances and the success of their own annual Memorial Day festival Amberland, and it is clear that PGroove has been reinvigorated with the addition of keyboardist John Hruby (formerly of Guest). Born on the steps of The Savannah College of Art & Design in Savannah, GA in 1999, the band now hails from Athens, GA and has once again reinvented their sound. The lineup adjustment, a change in management and a new perspective has given way to a beautiful, timeless set of recordings and live shows that signifies the rebirth of a band that has carved out its own unique sound by performing over 1,200 live shows in their brief career.

“The Culture Room for us and our fans consistently rates as a favorite venue,” says PGroove guitarist Brock Butler.

Here’s how to enter:

2. Tweet us stating why you should win Perpetual Groove tickets.

Winner will be chosen at random by Thursday (8/11)