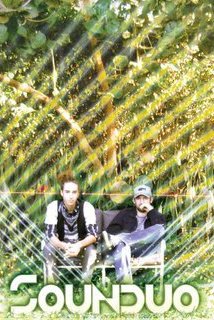 Sounduo was named during a brainstorming session with some close friends of ours who noted it’s almost palindromic nature, and its to-the-point description of the band.

Will and Zach met studying music at the University of Miami’s Frost School of Music’s jazz program. They collaborated in a variety of music projects starting in around ’05 and began to establish themselves as seasoned musicians of many genres of music performing and recording with regionally and nationally recognized artists in the Miami area. Sounduo was created from a mutual love of making electronic dub music for many years and a back catalog of music waiting to be showcased. We became a multi-sensory experience with the addition of Andrew Byrd providing a live vj/lighting performance, synced to the live performance of the music.

Tell us about your forthcoming EP.

The forthcoming EP is a collection of recent works we’ve been making in the last few months that we have been performing live. We’ve been sculpting our sound and experimenting with creating our soup of genres. We’re definitely stoked on the product and can’t wait for this next round of tracks to come out. It definitely represents what we sound like now when you come see us play. It’s going to have, giver or take, 7 tracks.  Maybe a bonus track or two. We are also going to be releasing a few remixes we’ve done very soon. The recording doesn’t have a name yet but will be available for download in the early fall so stay tuned!

What’s your process when making and recording music?

Both of us are actively involved in the production process, which is then translated to our live performance setup. Songs usually start with an initial spark then one or both of us take the song through its iterations until its sounding how we want. We both play several instruments and produce, so it’s easy to take the songs where they need to go.

You’re part of a stellar lineup at Blackwater Music Festival this fall, what are you most looking forward to?

It will be our first time at the festival grounds for Blackwater, so we’re excited to premier some new music and be a part of the great lineup they have scheduled. Florida has got some great bass fans in the North and we’re happy to represent Florida Dub!

Tell us about your experience at Ultra Music Festival this past spring.

UMF 2010 was a huge inspiration for Sounduo’s inception so it was an honor to be a part of the festival only one year later. We were featured as part of the first-ever Ultra Remix Competition as first place winners of Afrobeta’s ‘Play House’. Big shout-out to Tony and Cuci!  Check out the remix’s on iTunes and Afrobeta’s sick music video!

Our favorite venue?  It’s hard to answer that because we’ve been a part of the Florida music scene for a few years now as a part of a few different bands and have had many great experiences in the area. There are many great venues around Florida and we support anywhere that promotes live music.

local music represents society in a more detailed fashion than the force-fed corporate stuff, representing what is to come rather than what already is.