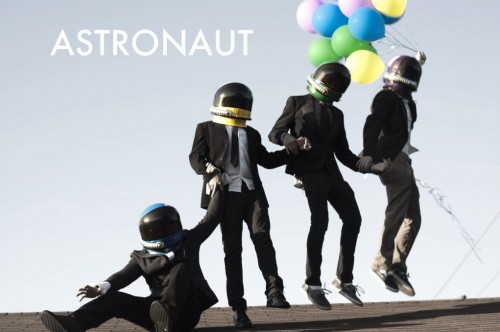 Astronaut was not our official name until we had already made two songs. At that point we were past due for a band name and for days we would come up with names that were alright but did not paint the picture we were seeing. Astronaut popped up and it fit the criteria; not too wordy, nothing that gave the wrong idea to people who have never heard of us, it was something that can be taken seriously without being boring, and ultimately it was also pretty cool. We were not sold on the name until we thought of what it meant to be an “Astronaut” so to speak with our music. An astronaut in space can feel insignificant looking at Earth yet at the same time feel important and part of something larger. We write songs about ideas and anecdotes that are possibly larger than oneself; it was not about cheesy teenage hardships, it was about engulfing your mind with ideas and interesting thoughts that kept you awake at night.

The drummer Christian, the guitarist Cristian, and the guitarist Andres had jammed with other friends for ages. Christian (more commonly known as Yoda) and Cristian (due to confusion with similar names is known as Craig) have been in bands before Astronaut with less than chart topping success. We were young and thought we could be rock stars like any other bunch of kids our age did. Years of much, much more study later, while our friend Christian was out of town, Andres and Craig actually wrote a full song with a verses and structure and it was like having our first musical baby. We showed it to Christian when he got back and he knew we were serious so we got down to business. Christian is one of our main vocalist and although Andres and Craig sang back up vocals, we knew that in order to not sacrifice more intricate drum patterns we would need another lead vocalist. We had been looking for a vocalist for a while now but none fit the sound or vibe we were looking for. Low and behold we found Diego accidentally at a school talent show. We had been acquainted with Diego for years and he tried out and it was a success. He also played piano so it was a double whammy, we pretty much sealed the deal over the fun fact our initials were ACDC.

What inspired you to make music together?

Craig, Christian, and Andres have always been friends. We have known each other since elementary and growing up we were always into different things from everyone else. Topic of conversation always seemed to be who broke up with who or whose going to fight while we would wonder about things like if the light from Earth just recently hit across the universe, would aliens on another planet be seeing dinosaurs? Instead of obsessing over gossip it was many silly thoughts like that that we at least found relevant. In any case there was not much more to say about the local music scene; everything was a MILD variation of electronic house music. It was and continues to be dreadfully monotonous. The people there could care less about music and only wanted something to bob their head to while they try to mingle. Most other shows that actually had real instruments in the area were mostly hardcore/pop punk bands who only turned up the distortion and yelled. What really inspired us was the overall lack of integrity local and radio music had, we went from Bach and Beethoven 200 years ago and somehow ended up with this. It is hard to explain, but whether Grand Central is our last show or we make it big and somehow play at Stonehenge, we really want to show that in order for music to evolve, some bands have to risk it for the biscuit and take a step forward instead of taking a step back down a predictable route.

This is probably the most difficult question people ask us. We want to say indie but that does not really cover it especially with how anything nowadays is indie. Our sound is constantly evolving from songs with a powerful moving feel to songs with samba grooves to 60′s music vibes. It is crazy we know, and it sounds odd but it really is exactly that. We do not limit our selves and we want to branch out into everything. Yet, in doing so, we still strangely maintain loyal to that Astronaut sound.

Who are your biggest musical influences?

We draw from a wide spectrum of sounds, from Led Zeppelin to Radiohead. We have to pay our respects to The Beatles of course for their fair share of influence. We even grab a little from new acts like Foals and Band of Horses. However, we also have a lot of classical influences; we figure to be like the greatest bands, listen to what they listened to.

When you compose a song where do you get your ideas from, and how does a song evolve?

Lyrically we are influenced by several things, in one of our tracks called “Three Sirens” we draw from imaginative situations like western duels. We try to write more towards specific feelings like “moving” or ” the anxiety of change”, it sounds bizarre but it makes us feel more emotionally attached to our music and also causes a connection to emotions and tensions with the audience. Music on the other hand is more technical. We actually use a lot of music theory since one of our guitarist’s Craig studied theory and our pianist/vocalist Diego studied classical piano. We use interesting time signatures, chords, scale changes and intertwining guitar melodies in our arrangements so our music has substance along with catchy-ness. We like to think our music has a pretty face with some personality.

You’re playing Grand Central this Friday, what we can expect from a live show?

We always dress for the occasion, and you can expect to hear some of the songs from our upcoming EP, and also have a few new ones we were saving to play for the first time at a show to surprise old fans.

Catch Astronaut with Space Between Words, and Morningwar at Grand Central Friday 7/8 for a FREE show. More info

One Response to “Local Spotlight: Astronaut”