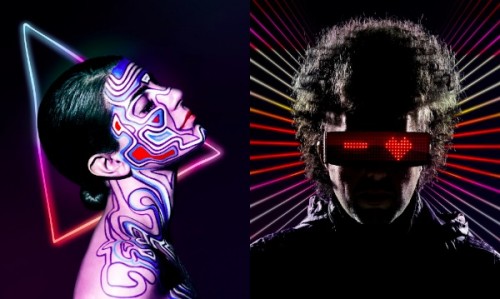 Our very good friend, and Cuci’s stylist Mila Gonzalez came up with the name in 2006.  It was more like an experiment than a band at first.  That’s where the “beta” comes in.  The afro comes from the shape of my hair.

We met at Jazid in January of 2006 at a Suenalo show.  She approached me after the show and we became friends right away.   Later that year, Cuci brought me a poem she had written after a sleepless night.  I helped her write her first song.  The rest is history.

It’s electronic music but all the songs are written on acoustic instruments.  It’s has elements of funk, electro, classical, rock, dubstep, hip hop, and jazz

Tell us about your upcoming album.

The name of the album is Under the Streets, and the release date is August 9th.  We recorded and mixed all the music in our living room.  The vocals were recorded by Kent Hernandez in his bedroom.  It was recorded from mid July to November 2010.

How much do you attribute Ultra Music Festival these last few years for putting your name on the map?

You played Glastonbury the mecca of summer music festivals, tell us about that experience.

We played the Glade Stage on Friday at 5:45pm.  It was amazing!!!  That stage is one of the best at Glastonbury, especially during the day because it’s covered.  Not too many people knew us but the people that watched us loved it.

Starting August 11th, Identity Festival the 20 city “Road to Ultra” tour will be kicking off with you on the bill. What are you most looking forward to?

I’m looking forward to performing at all the best amphitheaters in U.S. with an amazing sound system.  Also, the fact that it’s on a bus, and not flying.

The Green Parrot in Key West.  They treat the bands like gods over there.  Free beer all day and the band house is right behind the bar.  It’s always a paid vacation in KW.

it will help you grow into a better person.

This is fantastic! Great work.

Leave a Reply to August Highlights from SFMO — Jolt Radio