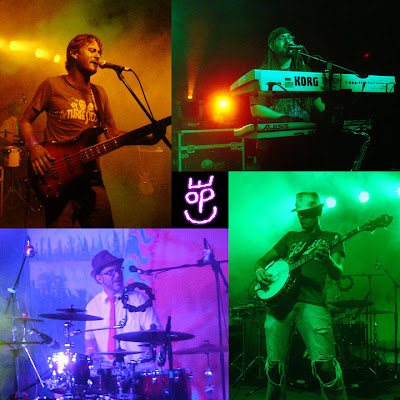 Yesterday afternoon, I had the pleasure of chatting with Kenny Stadelman, the bassist and vocalist from Cope. They are one of  several bands that will be at Aura Music & Art Festival this weekend.

What’s the origin of your band name?
Kenny: Everyone uses music to copes with things. Basically, that how it came about.
You guys are based out of Tampa, how is the music scene there ?
Kenny:  We have a large fan base in the Tampa Bay area. With monthly shows at Skippers & Ringside in St Pete. Our New Years Eve show at 662 in St. Pete, filled out the place.
Do you perform in South Florida often?
Kenny: We just had a show at the Hurricane Bar & Lounge for Brotherly Love Productions.  In the past, we have done a few shows at Tobacco Road, and Funky Buddha.
How do you describe your music to people?
Kenny:  Lots of surprises. Anywhere from jazz, to blues, to rock. The tones are similar, and we have a lot of variety. You can always hear all of our influences come through. It just depends on which night you catch us, it could be more rock, electronica, bluegrass. We tend to feel out the crowd, since we are fans of all types of music.

Who are Cope’s biggest influences?
Kenny: As a group,  we range from The Beatles, Talking Heads, Miles Davis, George Clinton, and Bob Marley. Personally, my influences are;  Eric Clapton, The Grateful Dead, The Beatles, and Jimi Hendrix. In the last 10 years, I have leaned more towards jazz.

Do you write all your songs collectively?  What is that process like?

Kenny: It’s a variety on how the process works. Since Juan has been in the band the last 2 1/2 years, we write the songs together.  We all put our feel on each song, that way we are not limited. On occasion, we will individually write a song, and then go back and tweak them.  Then the arrangement sounds like Cope.

What can people expect to see during a live performance?

Kenny: Lots of energy, positivity, and crowd participation. There are tons friendly people, hugs, and dancing. On our bigger shows, we have a light show.

What are your favorite songs to play live?

Kenny: That’s a hard one. I would have to say “Shake Anything,” the song itself can easily reach 30 minutes. The song goes from funk, jazzy, to electronica.  It allows us the freedom to take it where the they want to. So we can explore different sounds. By far this song is one of my favorites because it gets the best crowd responses. A lot of people know the words to “ Going Home. ” Anything that the crowd gets into are my favorites.

Typically, what is first thing you do when the band arrives in a new town while on tour?

Kenny: It’s a family vibe that we try to put out, so we want to meet our fans and hang out before the show.

Have you performed outside of the United States? If so, how did that show differ?

Kenny: Dennis, Juan, and myself play for another local band, Buffalo Strange. We played 14 shows in Thailand about a year and half ago. Some friends saw the band, and invited us to play a  surprise anniversary party for family member. The shows differs because it’s not our fan base. We played at some tourist places, but the best shows were at little local places, like shacks. Everyone in Thailand loves reggae, and was open to our music.

What was your first  festival experience?

Kenny: My first festival experience was in Northeastern Ohio, just local festivals. After Jerry Garcia died, I started going to Jerry festivals. If it was within reasonable driving distance, I’d go.
What was the first album you ever purchased?
Kenny:  I remember having albums like Zeppelin IV, Kiss, and The Rolling Stones. The first album I purchased was probably Black Sabbath. I was a rock & roll kid.

Are you planning on hanging out all weekend for Aura?

Kenny: Yes, we scheduled some time off, and it’s close to home. A lot of friends, and family are coming in. We will just be hanging out seeing old friends, and making new ones.

Which bands are you looking forward to seeing?

Kenny: We are good friends with Papadosio. We did a show with them in Tallahassee couple months ago. We are both from Ohio, and have that connection. Just looking forward to a good time.